Obama functionary fired for a scandal

The Obama regime has been riddled with many scandals:

1 - Fast and Furious / Project Gun Runner where the regime allowed weapons to be sold to the Mexican drug cartel in violation of American law.  This resulted in the murdering of two Americas.  People died and no one in the regime / administration got fired.
2 – Benghazi, Libya: The attack upon the United States Consulate resulting in the murdering of:
Christopher Stevens – U.S. Ambassador
Sean Smith
Glen Doherty
Tyrone Woods
This was a result of gross incompetence by the regime and refusal to assist during the attack.  Four Americans murdered and no one in the administration Obama regime got fired.
3 - The IRS / Internal Revenue Service target conservative groups, Obama’s opposition for extensive and lengthy reviews in clear violation of the law.  The result was basically voter suppression during the 2012 presidential election.  No one got fired.
4 - The NSA / National Security Agency exposed for extensive / illegal telephone surveillance, damaging USA relationships with allies.  No one got fired.

However there was one firing the Obama regime the scandal was enormous enough to fire someone.  The fired gentleman was Jofi Joseph the nonproliferation director on the National Security Council.  What did he do to get fired?  Did he do something to cause the death of an American?  Nope, he was guilty of posting on Twitter criticism of the Obama Regime – FIRE HIM – criticism of Obama will not be tolerated.  Deaths okay, dissention not okay. 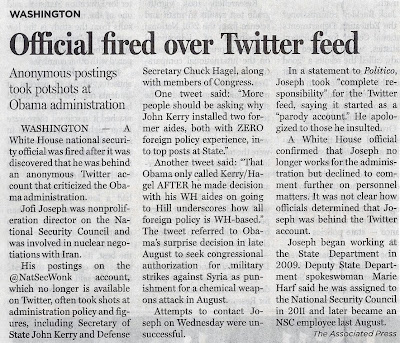 Posted by Tony aka: PropagandaBuster at 1:30 PM