Face it folks, the USA has been done in


Face it folks, the USA has been done in

To those not in the USA, here is proof-positive the USA has devolved.  This is a photograph of a rally in support of Democrat / Socialist Bernie Sanders seeking the Democratic Party nomination to run for president.  He is an avid socialist, which is a gateway ideology to communism.  Here in the USA, once the bastion of freedom and capitalism, this socialist garners such support.

This is what happens when runaway liberalism is allowed to hijack popular culture (Hollywood), the public schools, universities, the news media, and a political party.  Say goodbye USA.
It took forty years to get us to this point and we do not have forty years left to turn it around.
Posted by Tony aka: PropagandaBuster at 11:04 AM No comments:

Communist / leftists in Okinawa, Japan are attempting to suppress a book by Dr. Robert Eldridge.

He has a lovely Japanese wife and wonderful children all enjoying the good life in Okinawa.  Recently he authored a book titled “On Okinawa” or “About Okinawa” (オキナワ論 在沖縄海兵隊元幹部の告白).  The book is selling well throughout Japan except in Okinawa.  Huh?  The communist / leftists have intimidated book stores into not offering the book.

Typical behavior of Communist, leftists, cult groups (like Sea Shepherd) and the Democratic Party in the USA.  They fear opposing views and attempt to eliminate all opposition or independent thought.

A brief description of the book:

The book is called "Okinawa-ron (ron is pronounced not like the name, but like the "o" in lone or loan. It means "On Okinawa" or "About Okinawa". It literally means, a Theory about Okinawa. The subtitle is: The Memoirs of a Former Okinawa-based U.S. Marine Corps Official . It is a memoir of the past 6 years in Okinawa, to include dealing with the Hatoyama administration, the deployment of the ospreys, the anti-base movement and media, as well as community relations and Operation Tomodachi. It also discusses Mr. Eldridge’s long involvement with research about Okinawa and his realization of how "academics" and the media are too blame for much of the misunderstanding about Okinawa and the various agendas they pursue. It does not settle scores with anyone. It just tells the truth as he saw it.

It is explosive in sales. About 17,000 in one week. Yet, banned for the most part in Okinawa with the exception of a couple of big bookstores. It sold out quickly on Amazon, so if you are unaware of the book, and don't see it at your local bookstore, you would have no way of knowing about it. Okinawa is like China or North Korea, the Leftists are killing their own people intellectually and/or policy-wise.

It would be a wonderful rebuke to the Communist / leftists if many people in Japan would purchase Dr. Eldridge’s latest book.

In this article in Pravda, the Russians claim Dr. Eldridge was “head of the US Marine Corps in Okinawa.”  Perhaps in Russia “freedom of the press” means “free to print lies:”
http://english.pravda.ru/news/world/25-03-2015/130118-usa_general_japan_okinawa-0/

Link to Texas Daddy store:
http://texas-daddy.shop-pro.jp/
Posted by Tony aka: PropagandaBuster at 7:45 PM No comments: 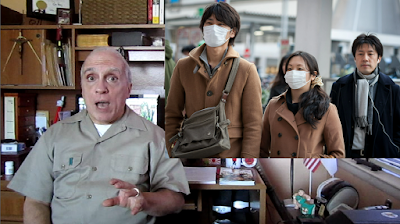 Link to above video:
https://www.youtube.com/watch?v=3wTynX2l7wI

Sea Shepherd’s sub group the Cove Guardians aka: Cove Coward Guardians are currently in Taiji, Japan behaving like smug western imperialist disparaging Japanese culture.  Of course the clowns hide this behind their pretend mantra of the care for dolphins to “documenting for the world” the activity in Taiji.

On the Cove Guardians Facebook page (see link below) they posted a photograph of Japanese men at the water’s edge with this inscription:

“ 1456: Several new faces are seen with The Whale Museum staff at the harbor pens. They must be nervous to be seen since everyone is wearing a mask concealing their entire face.”

The men were wearing surgical masks and according to the clowns of Sea Shepherd they to hide their faces because they were “nervous.”  How ignorant and condescending is that?  They are totally culturally ignorant when it comes to Japan.

The masks are worn to prevent others from catching a possible cold either by giving or receiving.  The masks are so prevalent and part of the culture that many have now become fashion statements.

Link to the Cove Guardians Facebook page, see 01 27 2016 timed at 12:03 AM:
https://www.facebook.com/SeaShepherdCoveGuardiansOfficialPage/

Link to Texas Daddy store:
http://texas-daddy.shop-pro.jp/
Posted by Tony aka: PropagandaBuster at 7:39 PM No comments: 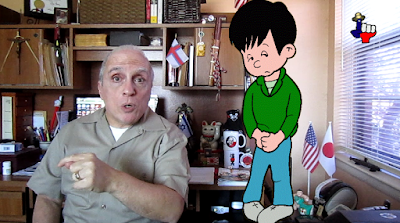 Link to above video:
https://www.youtube.com/watch?v=UlR9uxMjZsE

The U.N. sent to Japan a “human rights expert.”  This “expert” is a Ms. Rita Izak (Rita Izsak-Ndiaye), an Hungarian by birth.  Her official title is, “United Nations Special Rapporteur on minority issues.”  Wow, how impressive is that?  This young lady made one (1) visit to Japan and immediately became a world-renowned expert on hate-speech in Japan.  That is one accomplished lady.  Now how ignorant is that?

Based on that ONE visit to the Land of the Rising Sun (Japan) Ms. Izsak-Ndiaye is now calling for anti hate speech laws to be enacted in Japan.  According to the article about her ONE visit to Japan she “listened to accounts from a buraku community” and to accounts from ethnic Korean and Muslim residents in Japan.  As if that was not enough knowledge for this world’s foremost authority on hate speech in Japan, she indulged in watching videos on hate speech demonstrations in Japan and talked with citizens who oppose hate speech (free speech).  Perhaps she was not given popcorn while viewing the video and determined that too was hateful.

With credentials like that who can argue or oppose her recommendations?  Anyone can and should because she works for the United Nations.  Those two words in itself scream “disreputable.”

The United Nations is concerned about some people in Japan getting their feelings hurt, how nice.  Never mind recent migrants to Europe in gangs are attacking and raping women in Germany, Sweden, France, and the United Kingdom.  Of paramount concern for the U.N. is about someone having to hear offensive speech in Japan.

In the Middle East women are being sold into slavery, children forced to marry elderly perverts, Christians being murdered, and homosexuals thrown off the rooftops of buildings.  No, no, not to worry about that because the United Nations is deeply concerned about sensitive people in Japan.

In many parts of Western Europe “free speech” is an illusion.  There are laws prohibiting negative speech against protected ethnic groups, religions, and sexual orientations.  Hold a rally critical of an ethnic group or religion, and one faces legal consequences.  Preach in a religious institution references negative concerning certain sexual activities, and legal retribution could or would be forthcoming.
To the people of Japan: These attempts to curtail any form of free speech should be opposed in the interest of preserving free speech.  It should be noted with these freedoms we enjoy also comes a responsibility in exercising them.  Freedoms do come with responsibilities.  Freedoms can only be maintained with a vigilant freedom loving populace.

Article on U.N. “Human Rights Expert” who made on visit to Japan:
http://ajw.asahi.com/article/behind_news/social_affairs/AJ201601250024

Explanation of what a “Buraku community” is:
https://en.wikipedia.org/wiki/Burakumin

Link to Texas Daddy store:
http://texas-daddy.shop-pro.jp/
Posted by Tony aka: PropagandaBuster at 7:34 PM No comments: