An article appeared in The Dallas Morning News on January 20, 2016 from the Associated Press titled “More than 800 filings in German crime spree.”

The article concerned about the attacks upon women in Germany over the New Year’s weekend.  It has been widely reported the perverts committing fondling and rapes were refugees from North Africa and Arab nations.  However the article in an attempt to protect the rapists did not report the region of origin.  Instead the article reported

“Asylum seekers?"  From where?  Their previous local was omitted in compliance with political correctness to protect these perverts.  At one time journalist where taught all news articles must answer: 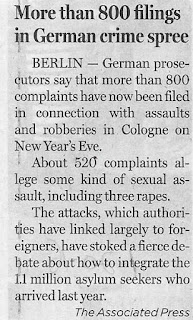 Known as the Five Ws.  Perhaps the 21st century version of this journalism formula needs to be revised by adding “only applicable if politically correct and does not disparage members of the protected groups
.”

Interesting articles how European authorities are treating these rapes:

Posted by Tony aka: PropagandaBuster at 4:59 PM