Paul Watson of Sea Shepherd has this post on Facebook about a 16-year old Native American boy living in Alaska who recently harvested a whale: 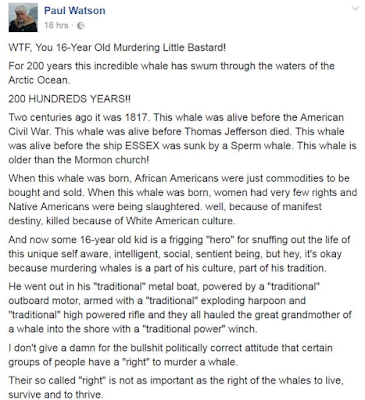 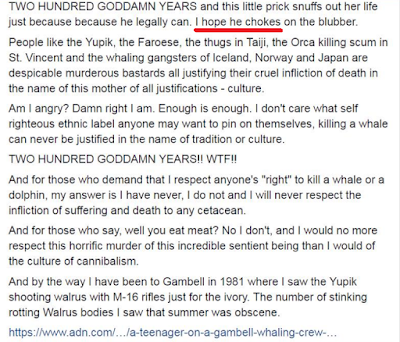 Here is a link to the article about the young man’s whaling accomplishment:
https://www.adn.com/alaska-news/rural-alaska/2017/04/24/a-teenager-on-a-gambell-whaling-crew-scored-the-villages-second-successful-strike-of-the-season/

Posted by Tony aka: PropagandaBuster at 8:25 PM No comments: 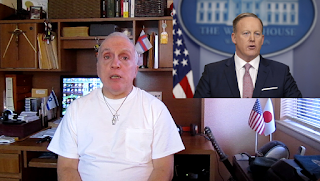 Link to above video:
https://www.youtube.com/watch?v=G3DqzT0G3Z0

Subsequently Mr. Spicer apologized.  Why?  Both Assad and Hitler gassed civilians.  Hitler used Zyklon B on civilians and Assad used Sarin on civilians.  Both are monsters and deserved to be equated with one another.

Last year in the Faroe Islands an historic wall was left with graffiti desecrating the site.  The graffiti read, “Warning Killer Nation.”  This was in reference to the whaling activity that takes place in their fjords.  It is called the “Grind.”  It is easy to suspect Sea Shepherd of this act of vandalism, however Sea Shepherd has not returned to the Faroe Islands since series of laws were passed basically banning the cult group.  This activity fits their modus operandi since their cult leader boast they are not a protest group but a direct action group.


Perhaps it was done by one of their minions and/or supporters.  Desecrating historic sites is not beyond this cult group’s behavior.  A few years back Flea Face and his daughter along with the Cove Coward Guardians (Cove Guardians) of Sea Shepherd were in Taiji, Japan.  Flea Face’s daughter with a few others went to a Japanese holy site and proceeded to desecrate the artifacts.


In 2012 the Cove Coward Guardians in Taiji again desecrated a statue there.  It was a statue of a man holding up a whaling spear.  One of the Cove Coward Guardians decided to dangle himself from the spear, causing it to bend downwards.  An act of vandalism, unintentional, however still an act of vandalism.  His parents had to pay for repairs to the statue then he was deported.


Two years leader this same person arrives in the Faroe Islands with a Sea Shepherd crew, thus labeling him a “traveling minion.”

With zero success hopefully their emotional wreck supporters continue to send them money allowing material for future videos as this one.  Thanks!

Posted by Tony aka: PropagandaBuster at 10:08 AM No comments:

Huh?  What happened?  What scared the cowards of Sea Shepherd to run (sail) in fear?  The cult group kept bragging they have a new fourteen million dollar vessel faster than any of the Japanese ships.  Was that speed needed to sail back to Australia?

According to The Guardian the Japanese whaling fleet had Japanese patrol ships with them.  That is what caused these brave defenders of the seas, Sea Shepherd to sail in fear to Australia with their tail between their soiled legs.

Once back in the safety of Australia they then demanded Australia send a government vessel to stop the Japanese.  Did the cult group’s minions donate money to the Australian government or to Sea Shepherd to stop the whalers?  Then Sea Shepherd placed a further plea for donations.  Donations for what?  To run from the Japanese?  Once again another Sea Shepherd failure.  They have not saved one whale this whaling season.  While Sea Shepherd was sitting in port in safety in Australia, the Japanese were busy attaining their whaling quota without any interference.  Ha ha ha ha.

First:  There is the Dolphin Project there “documenting for the world.”

Second:  There were six Cove Coward Guardians in Taiji.  If one made an attempt to free the dolphins only that one person would be deported leaving the remaining five to “document for the world.”

Third:  Sea Shepherd needs those dolphins to be captured for their dramatic live-streaming with heart wrenching commentary to incite their suckers to donate money.  It is all about money for this cult group.

To the emotional wrecks who continue to support this failure of a cult group, please continue to send them your cents because it makes no sense.

Posted by Tony aka: PropagandaBuster at 10:20 AM No comments:

Kim Jong-un, the Yanks are coming....

President Trump commented on news that is fake news and the news media screamed they are protected by the First Amendment to the United States Constitution.  Mr. Trump did not call all of the news media to be fake, he was critical fake news reported as real news.

The news media continues to cry there should be no criticism of them because they are protected by the First Amendment.  They continue with because of that protection they should be no attempt to regulate or interfere with the news media.

There are a few protections in the First Amendment, however only the free “press” should never be regulated or place restrictions on, or criticized.

“Congress shall make no law respecting an establishment of religion, or prohibiting the free exercise thereof; or abridging the freedom of speech, or of the press; or the right of the people peaceably to assemble, and to petition the Government for a redress of grievances.”

In 1989 the U.S. Supreme Court in the case “Texas v. Johnson,” ruled burning a U.S. flag is an expression of free speech protected by the First Amendment to the U.S. Constitution.

Further examination:  Burning a flag involves no speech, no verbalization, just action.  Yet that non-verbal act is protected as “free speech.”

Now explore this scenario:  A person with a baseball bat proceeds to beat another person of a different ethnic background repeatedly over the head.  While doing so the person committing the assault hurls verbal insults towards the victim about his/her ethnic heritage.

Link to Texas Daddy store:
http://texas-daddy.shop-pro.jp/
Posted by Tony aka: PropagandaBuster at 7:00 PM No comments:

Balochistan was an independent nation until 1948 when Pakistan invaded.  The Balochi king, His Highness Amir Ahmed Suleman Daud (Khan of Kalat) currently in exile in the United Kingdom.

China is using and/or building a seaport in Gwadar Balochistan.  From there they are building a railroad and pipeline leading directly into China.  This port is on the Arabia Sea avoiding the long sea route through the Indian Ocean to the South China Sea and to China.  Because of China’s aggressive belligerent behavior in the South China Sea the Balochistan route is an alternative.
Posted by Tony aka: PropagandaBuster at 6:54 PM No comments:

Well by that lack of reasoning the oceans must be dead – R.I.P.  This must be so because while Sea Shepherd continues to harass the Japanese the South Koreans are whaling without any Sea Shepherd hate / interference.

Thus if less than 300 whales taken by the Japanese contribute to killing the oceans then 2,350 whales removed from the oceans must have killed the oceans.

The cowards of Sea Shepherd are bullies who go after a passive people, the Japanese mariners, while avoiding those who are responsible for the removal of 2,350 whales, the South Koreans.  Sea Shepherd knows if they attempt to interfere with the South Koreans the response would not be passive.

Here is the above article in Japanese:
http://world.kbs.co.kr/japanese/news/news_Sc_detail.htm?No=46613


http://texas-daddy.shop-pro.jp/
Posted by Tony aka: PropagandaBuster at 6:46 PM No comments:

Sea Shepherd who claims to inforce made up laws to prohibit whaling in the Southern Ocean did absolutely nothing to prevent whaling even after they located the whalers.

According to an article appearing on “the guardian” news website (a news organization in the United Kingdom) dated 31 March 2017, the following:

“Past missions have been hampered by a confrontational campaign on the high seas by environmentalists Sea Shepherd.  A fisheries agency official said that the whalers this time faced ‘no obstructive behavior threatening safety of the fleet and crew members’ by the group.

He attributed that partially to Japan dispatching patrol ships to protect the fleet.”

Did you notice the last sentence “….Japan dispatching patrol ships…..”  There is the reason for Sea Shepherd’s coward behavior of sailing to the safety of Australian waters.  The bullies ran like cowards whey they discovered the patrol ships.  Interesting to note the criminal cosplay Watson makes absolutely no mention of the patrol ships and their cowardice.

Link to the United Kingdom’s “The Guardian” article Japan’s whaling, Sea Shepherd’s no action, and the Japanese patrol vessels:
https://www.theguardian.com/environment/2017/mar/31/japan-kills-whales-annual-antarctic-hunt

Where are the videos of Sea Shepherd being chased by the Japanese whalers?
No videos equals no chase.