HOV lanes (high occupancy vehicle) are being force upon Americans by bureaucrats in Washington DC who take a subway to work, who want to force behavior upon Americans. All vehicles should have access to all open lanes on our highways. We all pay road use taxes each year. So why should some vehicles be permitted to have access to highway lanes denied to others?

Here is a situation of the pot calling the kettle black. Senator Hillary Clinton (D-NY) seeking the Democratic Party's nomination to run for President of these here United States told another lie. However this time CBS News had the video to prove Senator Clinton (D-NY) told a lie. Hillary said when she visited Bosnia 12 years ago she was under sniper fire. Per the video from CBS news Hillary lied. Now the Clinton camp is saying Hillary "misspoke." Misspoke? It was a lie, not the first, not the last from the Democratic Senator from New York, Bill Clinton's wife, Hillary Clinton. CBS news may want to stay out of Fort Marcy Park in Washington, DC.

Between the Republican Convention, the Democratic Convention, the summer Olympics in Communist China with the back drop of the repression taking place in Tibet by the communist, and the traveling Olympic torch being dogged by protestors, this is going to be one very interesting year.

Posted by Tony aka: PropagandaBuster at 1:34 AM No comments:

Chinese Communist Treatment of Tibet a concern to Middle Ame

The Dallas Morning News continues to report the horrific events occurring in Tibet at the hands of the Communist Chinese. Yet there are few Tibetans in Texas, as there are more in New York and in California. Also reported that in Greece it is a misdemeanor to offend a national symbol. Then we have Americans who complain about the Patriot Act?

Posted by Tony aka: PropagandaBuster at 1:31 AM No comments:

The Chinese Communist soiled their skivvies (underwear) when they suppressed the Buddhist monks in Tibet. The left wing in America have always loved communism. But they also love Buddhism. As they (the American left) despise Christianity, they then see Buddhism as a replacement for their despised Christianity. When the Communist Chinese recently suppressed the Tibetan monks, the American left had no choice but to drop their support of communism and show their support for the Buddhist monks.

It also should be noted as a result of the Buddhist suppression, Democratic Speak of the House for the United States House of Representatives Nancy Pelosi expressed her support for Tibet while visiting the Dalai Lama in India. Should be noted here that Speaker Nancy Pelosi is third in line to be president or second, depending how you look at it. Constitutionally if President George Bush and Vice President Dick Cheney were to die, then Speak Nancy Pelosi would become President Nancy Pelosi of these here United States. Also all three of the presidential candidates (one of which will be the next president of the United States); all came out in support of Tibet. They are: Democrat Senator Barack Obama, Democrat Senator Hillary Clinton, and Republican Senator John McCain.

This time in The Dallas Morning News stated Tibet was invaded by Communist China, instead of using the word "annex" as they used a few days earlier.

Posted by Tony aka: PropagandaBuster at 4:40 PM No comments:

The Rev Jeremiah Wright of the Trinity United Church of Christ, pastor to Senator Barack Obama and family for close to 20 years, committed blasphemy from the pulpit. Why did the congregants applauding his blasphemous statements? One of the Ten Commandments read,

"You shall not take the name of the Lord your God in vain, for the Lord will not hold him guiltless who takes His name in vain."

The Rev Jeremiah Wright should have been removed from the pulpit for his blasphemy.

Posted by Tony aka: PropagandaBuster at 11:44 AM No comments:

Private Property illusion in the United States of America

We the people of the United States like to think private property rights in America are paramount. However recently with the abuse of eminent domain and approved by the United States Supreme Court, that concept has come into question. With the Supreme Courts approval one's property can be confiscated to be given to another who would produce a greater tax share. After your mortgage is paid, try not paying real estate taxes and see how fast who your private property belongs to.

The Founding Fathers added in the Fifth Amendment to the United States Constitution thought they put a protection of private property limiting eminent domain for public use. While the Supreme Court of the 21st century refused to honor the Founding Fathers and allowed eminent domain to be used to enrich the accounts of private individuals permitting the confiscation of private property for private use.

Posted by Tony aka: PropagandaBuster at 10:12 PM No comments: 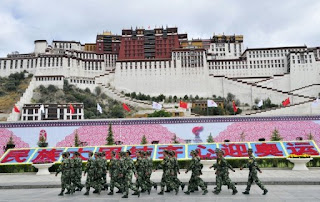 The American news media continues its love affair with communism. In The Dallas Morning News it was reported that Communist China "annexed" Tibet. When it back Tibet was invaded, defeated, crushed, and occupied by the Communist. Yet the American news media refuses to report the hard realities of communist aggression

A broad in India hates America

A broad in India, who has a YouTube ID of: VILLIVARU

Americans are tired of the constant criticism from no account slime from around the world. Be assured it these very people call for our help again, that call will fall on deaf ears, as we are going to keep our sons and daughters home, safe in America.

The Al Gore crowd has propagated one of the greatest propaganda hoax that would have made Hitler's propaganda minister Herr Joseph Goebbels proud. The earth warming is cyclical and it happens not because of humans but in spite of humans. We are too insignificant to have such an impact on this complicated planted. There has been more snow in the USA this pass winter than in decades past. Where did that snow come from if the earth is warmer?

The governor of the State of New York, Democrat... (more)
Added: March 11, 2008
The governor of the State of New York, Democrat Eliot Spitzer, was recently reported to have had a meeting with prostitute. Yet the printed news media in America kept the fact that he is a "Democrat" governor buried deep in their newspapers. When an Republican politician is caught in a questionable morale situation, the headlines always mention "Republican" rather prominently for all to see his/her party affiliation. However when a Democrat politician is envisioned as having positive press, "Democrats" reads prominently in the headline. Further proof of the news media in America providing cover for the political party in America providing them with their goose-stepping marching orders.

Posted by Tony aka: PropagandaBuster at 8:24 AM No comments:

The news media are gloating that more Democrats turned up to vote in the Texas and Ohio primaries. What they fail to admit is that the Republican had no need to vote Republican as Senator John McCain has the nomination. Also a good deal of those Democrats who did turn up to vote, were actually Republicans voting for Hillary. As Hillary will be easier to beat in the November elections.

Posted by Tony aka: PropagandaBuster at 8:23 AM No comments:

The people of the Sea Shepherd claim the Japanese have a magic bullet.

Posted by Tony aka: PropagandaBuster at 8:23 AM 2 comments:

Posted by Tony aka: PropagandaBuster at 4:03 PM 8 comments: