Ric O’Barry of the Dolphin Project and “The Cove” is currently enjoying accommodations at the expense of Japanese taxpayers.  Mr. O’Barry while in Japan was drinking with some friends.  Afterwards he left and proceeded to drive when someone reported to the police Mr. O’Barry was drinking and now driving.

The Japanese police pulled Mr. O’Barry over and he tested below the legal limit on a breathalyzer.  When asked for his passport, he did not have it with him.  The absence of a passport resulted in his arrest.  As of this writing he is still enjoying free Japanese accommodations.

Prior to this event on the Dolphin Project’s web page appeared a photograph with Mr. O’Barry and two Japanese gentlemen.  One of those two is the mayor of Ito city in Japan.  The caption under the photograph read:

One problem:  That never happened.  The picture may be accurate; however the caption is in error.  Upon contacting officials at Ito City it was confirmed Mr. O’Barry was not appointed anything.  Just prior to this writing that photograph along with the captions disappeared from the Dolphin Project website.  However it can be located on the PropagandaBuster blog site.

Non related / related item:  Linda Trapp and Karen Hagen (disposable minions) of Sea Shepherd were deported from Japan when they attempted entry.  They were part of Sea Shepherd’s Cove Guardians, so they thought – ha ha ha.

Posted by Tony aka: PropagandaBuster at 7:14 PM No comments:

As of this writing two disposable minions belonging to the cult group Sea Shepherd have been deported from Japan.  The disposables entered Japan attempting to make their way to Taiji, Japan as part of Sea Shepherd’s Operation Kenkaku (Operation Metamorphosis).

The first disposable Karen Hagen from Norway thought she would out-smart Japanese authorities.  The previous two Sea Shepherd operations were led by a commissar named Dave (David).  Dave is not a disposable minion he is one of the cult groups elites.  In the cult group there are in order of prestiege and importance the following:

1 – The Superiors (such as the criminal cult leader and Flea Face).
2 – The elites (they serve on the rust bucket garbage scows and some as ground team leaders).
3 – The disposables (they are not good enough to serve in the first two groups.  Their role is to elicit donations from suckers due to their questionable behavior).

Dave was ordered not to go to Taiji this year because they feared him being deported.  To replace Dave the woman from Norway was selected to be a disposable to face being deported.  The Norway disposable thought she would be able to out-smart the nation and people of Japan.  Remember she is from Europe and historically trash from Europe have thought of themselves to be at an advance level higher than those in Asia. 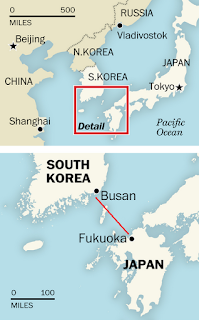 She went to South Korea to the city of Busan.  From Busan she boarded a ferry to Fukuoka, Japan.  Thinking by going this route she would avoid Japanese airport immigration where others have been deported.  Really?  When the ferry docked in Fukuoka, Japanese immigration officials intercepted this superior European from Norway and deported her.  Ha ha ha ha.

Soon afterwards another disposable named Linda Trapp from the USA arrived at the airport in Osaka, Japan and was detained for deportation.  Ha ha ha ha.

With each deportation the criminal leader on his Facelessbook page bemoans the deportations are a result of the Japanese attempting to hide what is going on in Taiji, Japan.  Really?  If that is so then how come for the past seven years or so Sea Shepherd has been allowed to roam around Taiji with impunity and allowed to interfere with business?  They were and are allowed to photograph, video, and live-stream without any interference from Japanese authorities.  To claim the Japanese want to hide the activities in Taiji is a pure hallucination and meant to invoke the emotions of the sucker minions to gain further donations.

Also if they Japanese are attempting to hide the dolphin activity in Taiji, question how come Ric O’Barry’s Dolphin Project group is allowed in Japan and to date no deportations announced?

Posted by Tony aka: PropagandaBuster at 2:11 PM No comments:

Two host from a radio station in Denmark are facing a barrage of criticism.  The two while live on the air slammed a rabbit to death with a bicycle tire pump.  They claimed this was done to illustrate the hypocrisy of animal slaughter.  Huh?

This type of logic only makes sense to the extreme elements of the discredited so-called “animal rights” movement.  The correct term should be “animals have no rights.”

With this twisted logic why not send the two to the Faroe Islands?  Once there they can participate in a Grind.  Then on the beach with the dead whales they can slice up the whale for free food to demonstrate who wrong it is.  Reads idiotic?  Then welcome to the animal-rights movement.

NOTE:  This video was completed and uploaded on May 28, 2015.  For some obscure reason it was forgotten and just discovered during a review.

Articles in reference to killing the rabbit on live radio:
http://www.foxnews.com/world/2015/05/26/danish-radio-station-slammed-after-allegedly-killing-rabbit/

Link to Texas Daddy store:
http://texas-daddy.shop-pro.jp/
Posted by Tony aka: PropagandaBuster at 1:37 PM No comments:

Traveling by automobile through Switzerland, Italy, and France it is noticeable the nations are afflicted with bottom-feeders.  Graffiti seems to be epidemic caused by these vandals.  Highways, bridges, walls, fences, monuments, historic public buildings, and private buildings are all equally abused.

Liberals / news media / entertainment industry encourage this disgusting form of vandalism by attempting to label it as art.

Music: “Cowboy Song for My Country” from JewelBeat.com

Photographs and video used for capturing the graffiti was the SONY NEX 3NL/B.

Posted by Tony aka: PropagandaBuster at 12:48 PM No comments:

Japan’s Prime Minister Shinzo Abe in the interest of protecting his nation and maintaining the peace is leading his nation in the direction of “Collective Self-Defense.”  This doctrine would allow Japan to partner with nations in the region to deter aggression, most notably from Communist led China.

This initiative has riled many pacifists in Japan.  Many have valid concerns of Japan losing its pacifists posture they enjoyed for the past seventy years.  Others are motivated by leftists / communist ideology, while others are influenced by North Korea and China.  Japan partnering with nations to deter aggression will slow down if not stop China’s beligerant behavior.

Many protest over Mr. Abe’s initiatives have occurred throughout Japan.  A courious aspect of these demonstrators are signs they display written in English reading “Peace No War.”  Huh?

What “Peace?”  What “War?”  Have they fallen victim to an American Public School education?  They already have the “peace,” because Japan is not currently nor planning to engage in combat.  Japan has not been at “War” in the last seventy years.  Do they think Japan is still at “War?”

Not to be outdone with perceived anti-Abe protest some clowns across the Sea of Japan in South Korean have demonstrated against Japan because of Prime Minister Abe.  Are these people also victims of an American Public School education?  Do they not realize the doctrine of “Collective Self-Defense” would involve actively supporting South Korea when North Korea attacks?  In other words they are protesting against a Prime Minister who wants to assist their nation in maintaining their sovereignty in the face of their neighbor to the north.

A collection of articles related to the topic of Japan’s Collective Self-Defense:
http://thediplomat.com/tag/japan-collective-self-defense/

Link to Texas Daddy store:
http://texas-daddy.shop-pro.jp/
Posted by Tony aka: PropagandaBuster at 12:43 PM No comments: