When Sea Shepherd’s rust-bucket garbage scow the M/Y Bob Barker left Germany and set sail for the Faroe Islands, Cabin Boy (Peter Helmethead) was not the pretend captain, instead there was a new pretend captain.

What happened?  Was Cabin Boy thrown overboard?  Did Cabin Boy abandoned ship?  This is another Sea Shepherd expose as their subterfuge has been identified.

Magnus of Sweden investigated the M/Y Bob Barker recent voyage to the Faroe Islands.  The scuttlebutt is while the MY Bob Barker was in Germany the clowns stripped the rust-bucket of expensive electronics and other valuable equipment.  Reasoning the vessel was going to be used to be purposely confiscated by Faroese / Danish authorities.  Once seized then the criminal cult leader living the luxurious life style in Paris will make an appeal for money to purchase a new vessel.

The claim will be the vessel was illegally confiscated and plead for defiance by replacing the rust-bucket garbage scow with a new vessel.  Remember in 2008 the floating circus caused their rust bucket garbage scow the RV Farley Mowat to be seized by Canadian authorities.  After the seizure the cult group made an appeal to purchase a new vessel and they got their new vessel. 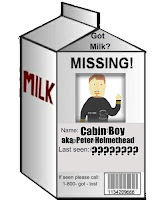 That is the scuttlebutt about the M/Y Bob Barker; let it be seized with a disposable crew.  That was why Cabin Boy was not the pretend captain, because he is not disposable, he is part of the elite Sea Shepherd clowns.  It makes sense knowing Cabin Boy would not quit the cult group because he served many years and finally got his pretend captain stripes.  He was not thrown overboard because he has too much dirt on the criminal cult leader.

The Faroese authorities ordered the M/Y Bob Barker to leave Faroese waters.  As of this writing the vessel is just beyond the Faroese territorial waters.  Speculation is they are waiting for a heroic opportunity to sail back into Faroese waters to get the vessel seized, the clowns disposed of, and money flowing to the criminal cult leader.

Note:  The photographs of the MV Farley Mowat were sent by a member of the Canadian Coast Guard in 2008.  After viewing the rust the term “rust bucket garbage scow” was created to identify the vessels soiled by the cult group.

Posted by Tony aka: PropagandaBuster at 8:02 PM