Sea Shepherd disposable minions continued to be disposed of

Sea Shepherd disposable minions
continued to be disposed of 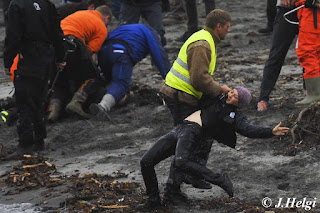 Their accomplishment was to gain money donations for their criminal cult leader enjoying the good life in Paris, France, while zero whales have been saved.  The behavior of the disposable land team in the Faroe Islands is classic cult-like.  They throw themselves to be arrested while their criminal leader resides miles away in safety.  He tells them to do this to save whales when no whales are being saved.  The mindless disposable minions are too mindless to assess the situation.  They are being thrown in jail while their cult leader is on the run from being in jail himself.  He tells them it is honorable to be arrested on behalf of his clients the whales while he is wanted on two continents and jumped bail from Germany.

Each time a Grind (whale harvesting ) had taken place this summer in the Faroe Islands, Sea Shepherd’s vessels the Bridgette Bardot and Sam Simon sailed out of Faroese waters to avoid arrest.  Remember the elites serve on the vessels while the trash are thrown to be part of the disposable land team.

Posted by Tony aka: PropagandaBuster at 8:10 PM

This is total bull. No one expects that a few people are going to "Save the Whales". The campaign is to draw international attention to the barbarous slaughter of whales and dolphins in the name of "tradition".

It's easy to be an arm-chair critic. Get your arse off the couch and doing something constructive.

Paul Watson is doing something for the world, how do you feel when your kids don't even know what a whale look like? Not eating whales doesn't kill you, go eat something else, you shit head! Faroe islanders are stupid dick, thinking they are smart, but they're actually dumber than whales.