Mr. Seo Gyonkoku of South Korean is misinformed, engaging in Japan-bashing and needs to be in touch with history.

This hate by these South Koreans only server to create a rift in the Japan – South Korean – USA alliance to the delight of the Communist in North Korea and China.  Basically these idiots are playing into the hands of those responsible for the aggression in Asia.  Talk about being an idiot.
Currently the United States Navy proudly serves alongside the Japanese Navy with the Rising Sun   So are these Koreans accusing the United States Navy of proudly serving alongside the Nazi flag?
Related article:
http://japanese-commentator.blogspot.com/2014/05/rising-sun-flag-is-not-same-as-haken.html

Posted by Tony aka: PropagandaBuster at 10:41 PM 2 comments:

“On May 1, 2014, a grand jury in the Western District of Pennsylvania indicted five members of the People’s Liberation Army (PLA) of the People’s Republic of China (PRC) for 31 criminal counts, including: conspiring to commit computer fraud; accessing a computer without authorization for the purpose of commercial advantage and private financial gain; damaging computers through the transmission of code and commands; aggravated identity theft; economic espionage; and theft of trade secrets.”

Perhaps China can retaliate by placing an embargo of the faulty products and tainted food they sell to the USA.  Such an embargo will cause chaos at Walmart.

This is pure politics.  When X-rated Bill Clinton ran for president, both times the Chinese army (PLA) made illegal campaign contributions.  Resulting in allowing the commies to engage in espionage in the USA without interference.  Recently when President Obama ran for office in 2008 and 2012, the PLA did not make any illegal campaign contributions and now we see the revenge.  Vengeance is mine saith the Obama.”

Note to Commies:  Next time a Democrat runs for president in these here United States of America, may want to make your illegal campaign contributions again.

Article referenced in this video:
http://www.washingtontimes.com/news/2014/may/19/us-eyeing-charges-in-foreign-cyber-espionage-case/

How the FBI broke the commie spy ring:
http://www.newyorker.com/online/blogs/newsdesk/2014/05/how-the-fbi-cracked-a-chinese-spy-ring.html

Charges against the five commies:
http://www.fbi.gov/pittsburgh/press-releases/2014/u.s.-charges-five-chinese-military-hackers-with-cyber-espionage-against-u.s.-corporations-and-a-labor-organization-for-commercial-advantage 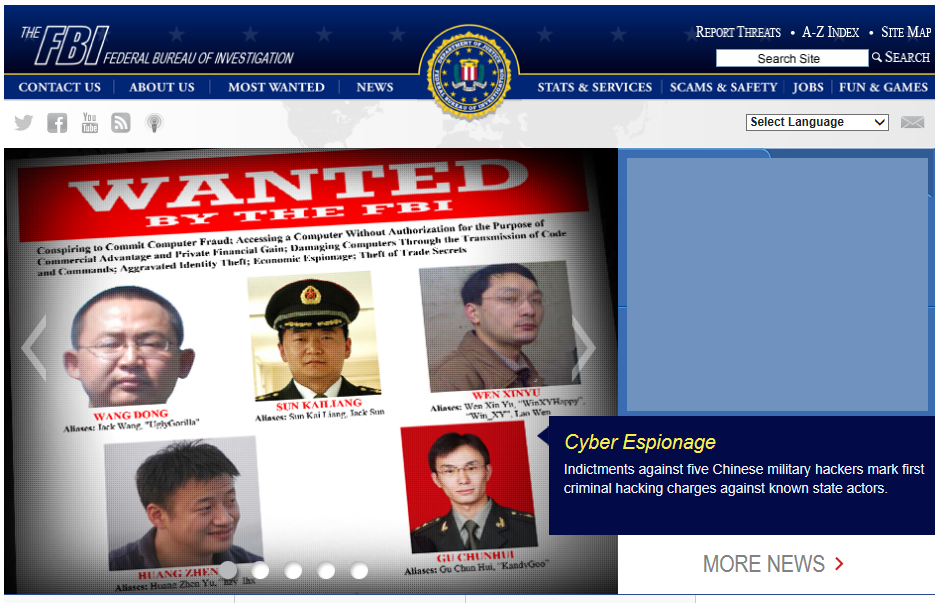 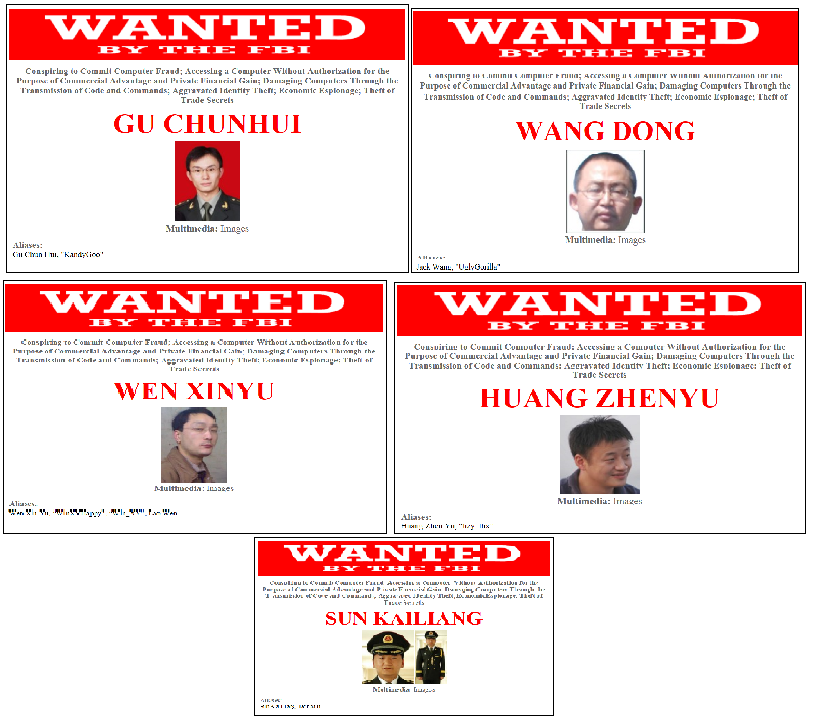 An article appearing in the 16 May, 2014 issue of The Dallas Morning News reprinted from The Washington Post, the headline read: “Japanese prime minister proposes end to pacifism.”

Really?  That headline is miss leading and a lie.  Japan’s Prime Minister Shinzo Abe is proposing a reinterpretation of Article 9 (referred to as the “peace article”) in Japan’s Constitution.  Note: that Article was written during the occupation of Japan following World War Two.

The text of Article 9 in Japan’s Constitution:

“ARTICLE 9. Aspiring sincerely to an international peace based on justice and order, the Japanese people forever renounce war as a sovereign right of the nation and the threat or use of force as means of settling international disputes. (2) To accomplish the aim of the preceding paragraph, land, sea, and air forces, as well as other war potential, will never be maintained. The right of belligerency of the state will not be recognized.”

The purpose of Prime Minister Abe’s desire to re-examine Article 9 has become necessary due to the aggressive and belligerent actions by the Communist in China, and the menacing behavior of the lunatic communist in North Korea.

The Commies in China are claiming practically all the waters and territories in most of the South China Sea, violating the EEZ (Exclusive Economic Zone) of many nations.  They also are claiming air space belonging to other nations.  The Chinese communist military has stolen islands from the Philippines and as of this writing attempting to steal territorial waters from another communist nation, Vietnam.

Had China not been so belligerent there would have been no need for Prime Minster Abe to make such a proposal.  What is interesting is the only nation bellyaching about this is China.  What a joke.  With the United States under the control of the Democratic Party, the USA may not be a reliable ally in the future.  Making it urgent for Japan to address their own defense and ready to assist the defense of allied nations in Asia.

With Japan allowing itself if assist allies in the face of aggression, Japan becomes a reliable and responsible deterrent to Chinese belligerent maneuvering.  Commies in China, be warned: Don’t mess with Japan!  To do so will be at China’s own peril after awakening a “sleeping giant.” 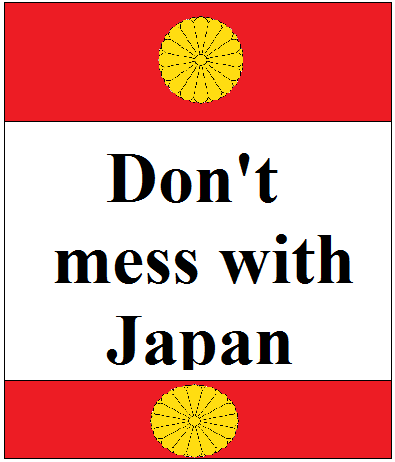 Posted by Tony aka: PropagandaBuster at 6:40 PM No comments:

Obama regime release criminals back to the streets

Obama regime release criminals
back to the streets

Once again the Democrats and the Obama Regime has proven their desire to contribute further to the destruction of the United States of America.

The Obama Regime released 36,000 illegal aliens that were being held waiting for deportation.  Among the 36,000 illegal law breakers were the following criminals:

Now American can sleep in safety knowing their government released to the streets criminals who should have been deported.  This was done purely for votes and to further destroy the nation.

Link to Texas Daddy store:
http://texas-daddy.shop-pro.jp/
Posted by Tony aka: PropagandaBuster at 5:23 PM No comments:

Link to episode one:
http://www.youtube.com/watch?v=WeS1LLZV4zI&lc=sSzD8lZZO03QKneql7pjcCj7rlzWeXsBMeaNFaay91E&feature=inbox

For years been posting videos extolling the ills of Sea Shepherd for basically being oriented to getting people to part with their money rather than saving whales or dolphins.  To help with this message recently former members or members of Sea Shepherd have reached out to expose the sordid details of this cult-like group providing an expose’ much needed.

A Sea Shepherd insider recently provided the information in this video.

When his Excellency pope Paul the Watson use to sail their rust bucket garbage scow the Steve Irwin  Due to his Excellency enjoyed the companionship of his girlfriends while on those long voyages.
other members of the cult group dubbed it the Love Boat.

On one voyage while in pursuit of the Japanese whaling fleet, Watson’s vessel lost a whole day.  His girlfriend fancied herself as a music artist and wanted to create a music video on one of the icebergs.   This caused the Steve Irwin to put in aside an iceberg while his sweetie performed musically in front of a video crew.  Is that what the suckers around the world donate to Sea Shepherd for?  How many whales were captured while Paul spent a whole day on an iceberg looking all googly eyes at the performance of his darling?

A torrid affair within the cult group with his Excellency being accused of winning the hearts of three girls while they were dating other members of the group and or supporters (all at different times, not the same time).  Seems like according to this report there is no loyalty in affairs of the heart when it comes to his Excellency.

The trimaran MY Ady Gil (formerly Earthrace) collided with the Japanese vessel the Shonan Maru 2 on January 6, 2010.  The vessel did not belong to Sea Shepherd; it was charted to them by Mr. Ady Gil.  It is curious to note here an insider stated Sea Shepherd is suing the Japanese whalers for 3 million dollars for a vessel they did not own.  Huh?

When the MY Ady Gil collided with the Japanese vessel causing damage to the hull, according to Peter Bethune (former member of Sea Shepherd and skipper of the MY Ady Gil) the damaged vessel was released from being towed.  According to experts the vessel could have been repaired.  However his Excellency did not want to keep towing the damaged vessel causing the Steve Irwin to slow down in pursuit of the Japanese whaling fleet.

Because the MY Ady Gil was purposely abandoned Mr. Gil filed a 5 million dollar lawsuit against Sea Shepherd.  The 5 million dollar figure was inflated by his Excellency claiming the law suit was 50 million dollars.  Not correct another cult group hallucination.

The lawsuit filed by Mr. Gil asked for 5 million dollars; however it has the potential of reaching 45 million dollars, not the 50 million claimed by the cult group.  It is reported Mr. Gil offered to settle out of court for one million dollars allowing Sea Shepherd (the floating circus) to pay it out over a number of years.  The payments were to go directly to Mr. Gil who in turn said he would not keep the money but turn it over to other animal rights groups.

Sea Shepherd said no and the lawsuit continues.  Of course Sea Shepherd declined to pay one million and instead is determined to take their chances in paying anywhere from 5 million to 45 million dollars.  Because that money will come from suckers around the world.

Note:  Photographs and video of the MY Ady Gil courtesy of the Institute for Cetacean Research - ICR.
The “really” part of the video was created on the grounds of the Yasukuni Shrine in Tokyo, Japan.

Credits:  thank you to all who donate and support Sea Shepherd.  This extraction of money provides a wealth of material for these videos.  Thank you also to Sea Shepherd’s former / current members and or former / current insiders for providing the sordid details of this group.