Earth to The Japan Times


Earth to The Japan Times 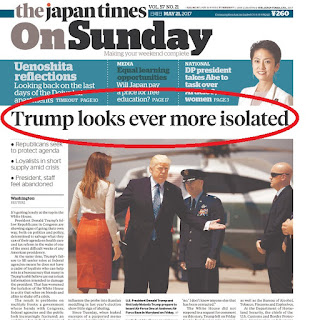 Please stop getting your information about President Trump from the fake news in the USA.
Trump has not lost any support from those among us who voted for me.  We are aware of an attempt coup (coup d’etat) taking place by the fake news media, the Democratic Party, academia, and the pervert thespians in Hollywood.

The Moon Over Korea


The Moon Over Korea

The newly elected leader of South Korea, Moon Jae-in (Mooning Moon), has established himself as an irritant to both the USA and Japan.

The mobs in the South Korean streets went to vote electing Mooning Moon to be their next president.  The previous one, President Park Geun-hye met the faith of many previous South Korean presidents, she was disposed of.  Others who held that office in country were either, assassinated, committed suicide, thrown into jail, or disposed of.  Thank God Parks faith was only to be disposed of.


This Mooning Moon fella stated he would like to meet directly with North Korea’s lunatic dictator Kim Jong-unnecessary (Kim Jong-un) over their nuclear development issue.  Analysts have suggested such a meeting to hinder the efforts by Japan, the USA, and once South Korea to neutralize North Korea’s nuclear ambitions.


Adding to the turmoil the United Nations Committee Against Torture has claimed that the Japanese did not compensate enough money during the last Comfort Women agreement between Prime Minister Abe of Japan and President Park of South Korea.


Corresponding with this insane UN pronouncement Mooning Moon stated he did not like the Comfort Women agreement made between Abe and Park.  Mooning Moon visited the Comfort Women statue hunk of junk standing across the street from either the Japanese Consulate in Busan or the one across from the Japanese Embassy in Seoul.  Both of which are in direct violation of the United Nations Vienna Convention of Diplomatic Relations, Article 22, Paragraph 2.

If the South Korean Mooning President ignores a United Nations Convention, the Prime Minister Abe is best advised to ignore the latest pronouncement from the blood stained UN Committee Against Torture.


North Korea has “Dear Leader,” and now South Korea has their very own “Dear Stupid” with Mooning Moon.