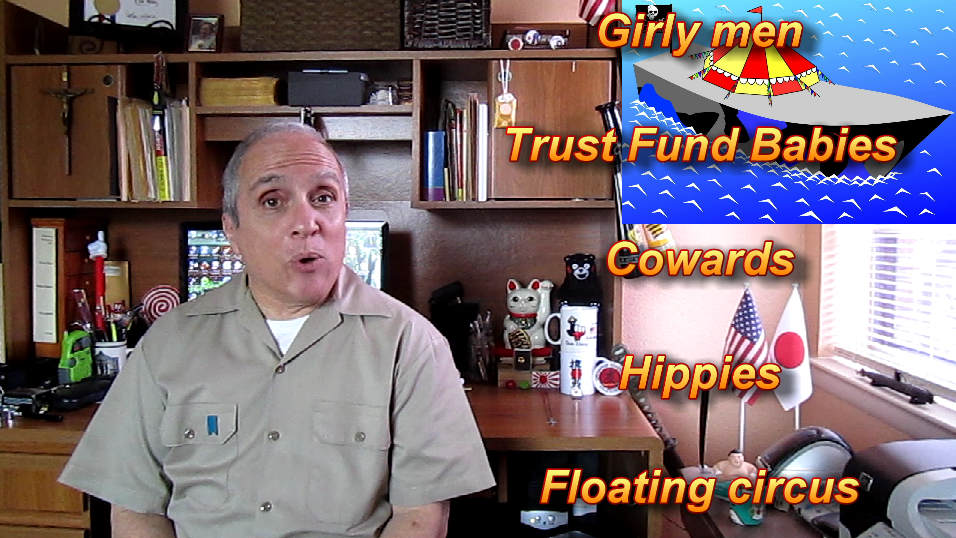 Posted by Tony aka: PropagandaBuster at 4:59 PM 2 comments:

Mr. Ben Stubbings from The Japan Times sent me an email requesting to use screen shots from my YouTube videos to accompany an article on foreigners.  In the same email Mr. Stubbings wrote “The article has a few lines about yourself but is respectful in tone.”

I replied agreeing for the use of screen shots from my videos.  I also requested once the article was published to please send me the link.  Days later the link was not received by me.  Searching the Japan News website I located the article titled:

After reading the title I discovered why he never sent the link.  Reading the article confirmed my original impression.  Apparently Mr. Stubbings has a different interpretation of “respectful tone” than I do. The article written by Mr. Mark Schreiber was riddled with insults, innuendos, and lies.

Understand criticism of me is not an issue; it was the deception that caused concern.  I would have agreed to the use of screen shots even if Mr. Stubbings had not written “respectful tone.”  I believe any publicity is good, even bad publicity because bad publicity is still publicity.

Mark Schreiber is from the USA, while Ben Stubbings is from the UK.  The deception does have a positive side as it proved what I continually caution people in Japan to guard against Western liberalism, specifically American liberalism.  Home grown liberalism in Japan is okay, however liberalism from the West is treacherous and will ruin any culture it haunts.

The next time I am in Tokyo I would like to discuss this with Mr. Stubbings and Mr. Schreiber concerning their behavior and the article.  I am willing to stand behind everything I said in my videos and everything I have written.  Will they be willing to do the same in reference to this issue?

This is Ben Stubbings at The Japan Times.

I am writing to ask whether we could have permission to take a screen grab
from one of your YouTube videos to accompany an article on foreigners who
share some of the ideas of Japan's resurgent right.

The article has a few lines about yourself but is respectful in tone. It's
basically a report in English on what Japan's weekly and monthly magazines
are up to, which talks about your recent appearances in various Japanese
media. The article is sure to drive traffic to your site and videos.

Please could you let me know ASAP whether we can use your image? The page
needs to be signed off and finished in 22 hours time (6 p.m. JST Friday).

My ignored rebuttal to the hit piece:

I am writing this in response to an article titled “Motley crew of foreigners backing Japan’s revisionists basks in media glare” appearing on your website accompanied with a huge photograph of my ugly mug (face).  I take no issue with the photograph, others might.  I take issue with how the article was presented to me and the tone of the article.  I wish to offer this rebuttal or as I would refer to a correction to that article.  My rebuttal / correction:

I received an email from Ben Stubbings requesting to use my material in an article and he wrote "The article has a few lines about yourself but respectful in tone."  The article appeared 22 March 2014, and after reading it I guess "respectful" is similar to art "it is in the eyes of the beholder."

I have to take issue with the tone and the title.  Words used "Motley crew," and "revisionists."  Euphemistically being part of a "motley crew" is an insult.  "Revisionists?"  In my video on the Comfort Women issue I offer an alternate view offering an official / historical document by the United States Army in 1944.  What is "revisionist" about quoting an official historical document?  People employ the word "revisionist" when attempting to defame a view of history they disagree with.

Written in the article, "Marano's main claim to fame."  I make no claim to fame, people contact me as this news organization did, and I do not contact people claiming any fame.  If there is any fame attached to my name it is because of others such as this newspaper not me.

The article reads I circulated a petition "demanding" the removal of the Comfort Women statue.  "Demanding?"  Here in part is what I wrote in that petition's request: "Please remove the statue....."  Does "please" read like a demand?  The word "demand" was used to insert a harsh tone, which was rather irresponsible and misleading and exposing a political bias sprinkled with an agenda.

My video on the Comfort Women was guided by solely "profit motive."  Please explain the profit motive I was guided by?  By writing "solely" it eliminated real motives, such as exposing the truth and trying to remove the USA from this dispute.  My motives clearly stated even with my "Law and Order" accent (as claimed in the article), in the video were ignored while the article hallucinated one nowhere mentioned or that can be supported.

The article claims a photograph of me with Mr. Hiroyuki Fujita is not a coincidence.  Does that mean there was something insidious about the photograph?  The article continues with my support of "political insertions."  My support in Japan is for patriotism, conservative views, and fostering a good relationship between Japan and the USA.  If this newspaper wants to write that is political, so be it.

Writing "...revisionists and fellow travelers" is a known insult I take issue with.  The whole tone of the article was an attempt to insult my activities and create false motives.  Every person I have met personally in Japan has been absolutely wonderful and I would like to think pure in their motives unless otherwise proven.  These are good decent people who care for their nation and proud of their nation.  I find an affinity with them as I feel the same about the USA and those nations who are good and trusted allies such as Japan.

The good people I have met in Japan and associate with are of the decent stock I identify with my Italian American family I was surrounded by in Brooklyn during the 1950's 1960's.  I seek no profit from nor to advance a political agenda.  My support and admiration is mutual.  Because some writer(s) takes issue with their conservatism and patriotism such insulting articles are written.  In seeking accurate journalism I only hope you would allow an equal rebuttal.  However I strongly believe the best rebuttal to the article is to ignore it.

When Mr. Stubbings wrote to me "The article has a few lines about yourself but respectful in tone," I took him at his word, only to discover perhaps he did not do the same.  Had he not written that, I would not have taken issue with the article.  Perhaps I should I have written "I wou nat teeken issue w dat erticle," (this is an expansion on the article attempting in part to insult my Brooklyn accent).   My accent is Brooklyn and I offer no apology for it because this newspaper finds it demeaning.

Thank you, please have a nice day, God bless Japan and the USA.

Posted by Tony aka: PropagandaBuster at 6:02 PM 7 comments:

The ruling political party in Taiwan, the Nationalist Party (KMT), reneged on their promise to conduct a clause-by-clause review of a trade pact with mainland China (Commie-led China, red China, and the Middle Kingdom).  The pact euphemistically referred to as the “cross strait service trade agreement.”

The students first demonstrated outside Legislative Yuan, the climbed the gate, occupied the building and the legislative chamber.  The police were unable to dislodge the students and as of this writing, they still occupy the chamber.

The ruling party / government did not keep their word, ignored the will of the people, and now the people react.

Posted by Tony aka: PropagandaBuster at 6:25 PM No comments:

Sea Shepherd Cove Guardians (affectionately referred to as the “Cove Coward Guardians”) have ended their six months dolphin viewing / tour in Taiji, Japan.  Time for a happy dance. The Cove Guardians during the six months leave a lot of money in the communities surrounding Taiji.  The Japanese greatly appreciate the money left by the cowards.

The dolphin tourism industry is lucrative in Taiji thanks to the Cove Guardians support.

Recently Martyn Stewart and Scott West were intercepted by authorities at the airport in Osaka, Japan, and deported.  The authorities labeled their Taiji activities as being provocative and disruptive.  These two deportations have the Cove Guardian Melissa concerned if she would be permitted to return to enter Japan.  Melissa being the superior to the inferiors, the minion Cove Guardians.

According to Melissa’s Facebook page (see link below) she has the ability to communicate with animals living and dead.  It has been reported she wrote / said “My soul and spirit remains forever in Taiji.”

Knowing her mystic abilities one can expect to see a spirit roaming the highways and byways in Taiji.

The happy dance in this video titled “cLick cRack” see link below:

Link to Texas Daddy store:
http://texas-daddy.shop-pro.jp/
Posted by Tony aka: PropagandaBuster at 9:50 PM No comments: