In 1999 a Philippine military hospital vessel, named Sierra Madre, ran aground near the Second Thomas Shoal (the Philippines call it the Ayungin Shoal and China refer to it as the Ren’ai Reef).  The Philippines has maintained people on the vessel to assert sovereignty.  Recently two Filipino civilian vessels attempted to sail to the vessel to resupply the military onboard.  The Commie Chinese Coast Guard vessels blocked the supply vessels.

The bully commies are claiming the Second Thomas Shoal belongs to The Middle Kingdom (commie-led China).  This is a result of the Philippines allowing China to steal the Scarborough Shoal.  It was a clear signal to Beijing to continue stealing Philippine territory because there are no negative consequences.  The aggressive commie actions are also due to it is believed there are large reserves of natural gas and oil in around the Second Thomas Shoal and the Scarborough Shoal.

All the Philippines had to do was challenge the commie Coast Guard.  The commies would have had
three choices: 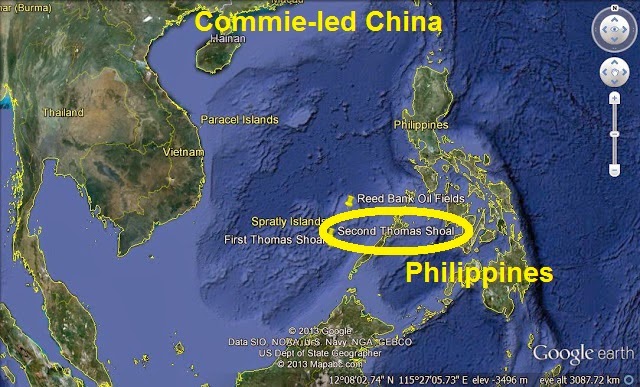 If the commies would have employed options #2 and #3, it would have brought world-wide condemnation and possibly an embargo.  The reaction would have had a negative impact upon their fragile economy resulting it a possible collapse of the commie government.

Whatever the option selected it would have demonstrated the Philippines will not be allowed to fall victim to bullies.  Because the Philippines have emboldened the commies it can be expected to see further aggressive action by the commies.  When they attempt to steal the Senkaku Islands from the Japanese that is when the bullying will be challenged.  Now how would that look in reference to the Philippine surrendering territory to the commies?

Basically the commies are claiming almost all of the South China Sea and allowing them to behave like bullies only validates their belligerent claims.

Posted by Tony aka: PropagandaBuster at 1:06 PM