At a diner named Denny’s on the cashier counter sits a donation jar for a charity.  Notice the lid of the jar is secured as well as the bottom is secured to the counter to prevent theft.

Posted by Tony aka: PropagandaBuster at 12:14 PM No comments:

The police chief of Childress Texas Mr. Adrian Garcia responded to an atheist group with “go fly a kite.”  In response and out respect for fallen police officers the Childress Police Department placed decals on their vehicles which read “In God We Trust.”  This caused an Atheist group the Freedom From Religion Foundation to send the police chief a letter protesting the decals claiming “separation of church and state.”

The police chief responded in a letter in part:

“After carefully reading your letter I must deny your request in the removal of our Nations [sic] motto from our patrol units, and ask that you and the Freedom From Religion Foundation go fly a kite,”

“In God We Trust” is the official motto of the United States of America.  It appears on U.S. money, the Supreme Court building, the House of Representatives, and a various government buildings.

Note the unofficial motto was “E pluribus Unum” (out of many, one) dates back to the 18th Century (1700’s) and appears on the Great Seal of the United States of America.

Link to Texas Daddy store:
http://texas-daddy.shop-pro.jp/
Posted by Tony aka: PropagandaBuster at 11:47 AM No comments:

Mr. Ady Gil through aberration won his lawsuit filed against Sea Shepherd / Paul Watson.   The arbitrator wrote some revealing about the criminal Watson most knew about him already.  Such as:

“Highly evasive,”
“……contradictory,”
“…..lacking the basic indicia of genuineness,”
“Watson’s testimony on this point was not credible,”
“His demeanor was evasive,”
“assertions that were not believable,”

The award of over $500,000 amounted to what the vessel was worth after the collision.  The money is not paramount, what is paramount is Mr. Ady Gil (who once served in the Israeli Air Force) was vindicated and once again judgement against Sea Shepherd / Paul Watson.

The reckless behavior of Sea Shepherd under his leadership demonstrates a total disregard for the money / items donated to the cult group.  It is an established fact the minions will continue to support his reckless money wasting behavior.  All this and absolutely nothing positive is accomplished.  The whaling still takes place in the Faroe Islands and the dolphin activity continues Taiji Japan.

To the minions: Please continue to donate to Sea Shepherd to help pay for future lawsuit judgements pending and providing material for these videos.

Background to the lawsuit:
The fugitive Watson aboard the rust-bucket garbage scow the Steve Irwin along with their other rust-buckets are en route to the Southern Ocean to illegally harass the Japanese mariners.  While en route TMZ reports Mr. Ady Gil filed a $5 million dollar lawsuit against Sea Shepherd / fugitive Watson claiming the vessel Ady Gil was purposely allowed sink, be abandoned after the tip of the vessel was damaged.  The damaged happened after the Ady Gil collided with the Japanese vessel the Shonan Maru 2.

When the incident happened on January 6, 2010 fugitive Watson reported the cable towing the damaged MY Ady Gil by the vessel Bob Barker snapped and the MY Ady Gil was lost at sea.  Mr. Ady Gil is claiming in the lawsuit the Ady Gil was released from the Bob Barker on orders from the criminal Watson.

Article by TMZ in 2013 reporting the lawsuit:
http://www.tmz.com/2013/01/08/whale-wars-lawsuit-ady-gil-paul-watson-crash-japanese-sea-shepherd-society/

Videos about the sinking of the MY Ady Gil:
https://www.youtube.com/watch?v=vMINeY1vMMs

Link to Texas Daddy store:
http://texas-daddy.shop-pro.jp/
Posted by Tony aka: PropagandaBuster at 1:06 PM No comments:

ACTA – American Council of Trustees and Alumni reported on a survey of 10% of U.S. college graduates conducted by GfK - Gesellschaft für Konsumforschung (Society for Consumer Research).  Here are the results are part of that survey:

Survey results mentioned in this video:
10% - Judge Judy o­n the U.S. Supreme Court
1/3 - Unable to identify the Bill of Rights
32% - Believe Representative John Boehner is the president
46% - Did not know the election cycle of Representatives, Senators, and President
11% - Think the Constitution is reauthorized every four years

Recently some nations have boasted their high school graduates are equivalent to college graduates in the USA.  After reading the results of this survey is that something to boast about?

Here are the survey questions:
http://www.goacta.org/images/download/Constitution_Day_Survey.pdf 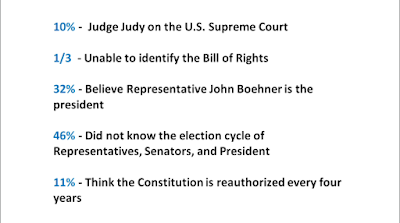 Posted by Tony aka: PropagandaBuster at 7:07 PM No comments:

Posted by Tony aka: PropagandaBuster at 11:39 AM No comments: