Seven clowns from the floating circus of the cult group Sea Shepherd have been arrested in the Faroe Islands.  The minions were arrested for pretending the prevent the harvesting of whales.

A court in the Faroe Islands assessed various fines to five of the seven and /or jail time.  Naturally the disposable clowns vowed not to pay any fines and are demanding to spend time in jail.  By spending time in jail they gain additional world-wide media attention and sucker donations for their criminal leader in Paris, France.  The prosecutor is working to get the disposable clowns deported instead of serving jail time.

This has caused their criminal cult leader to write on his Facelessbook page it is an honor for people of conscience to sit in jail for the purpose of saving whales from being harvested.  Huh?  This cult leader is wanted by two countries and jumped bail from a third country.  What about his honor and conscience to save the whales?  He is one of the elites and not part of the disposable land teams, thus no jail time for him.

A few years ago while in the Faroe Islands he boasted it would be worth forfeiting his freedom to save the life of a whale (his clients).  So where is the criminal now to forfeit his freedom for his clients the whales?  Last year another elite from Sea Shepherd while in the Faroe Islands boasted he will stand between a knife and a whale to save the whale.  Where is this elitists clown?

Over two hundred fifty whales have been harvested while the disposable land team has been in the Faroe Islands.  Recently two beached whales were harvested – where was the cult group?  Oh they made a telephone call about it.  Donating money to this cult group contributes nothing to saving whales as proven by this year’s harvesting.  What Sea Shepherd has accomplished with money donated by suckers was to contribute to the local economies of Taiji, Japan, and the Faroe Islands.  Because of Sea Shepherd’s activities at these two locations, tourism has increased.

The team leader this year of the disposable land team is the same girl who was the land team leader last year.  Last year members of her disposable team were arrested and she was all smiles.  This year while she was being arrested she displayed a look of horror and fear on her disposable face totally void of any smiles reminiscent of last year.
Quotes from criminal Watson’s Facelessbook ranting:

“Perhaps what is needed is for the Faroese jails to be filled with people of conscience. The whales need people willing to accept the honor of imprisonment for taking a stand in defense of life.”

“…now trying to deny them the honor of serving time for the whales. She is demanding immediate deportation.” 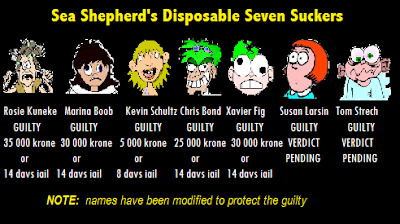 Posted by Tony aka: PropagandaBuster at 8:11 PM