Trans fats to be banned while allowing tainted food from China

Trans fats to be banned
while allowing tainted food from China 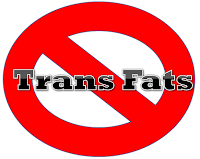 The FDA (Food and Drug Administration – the Obama Regime and the spineless Congress) are   Weather this is good or bad is not the focus here.  While the FDA is concerned about the health of Americans with this trans fats issue, they ignore the tainted food allowed to be imported from China.
going to eliminate trans fats from food in the United States.

If the nanny state advocates in Congress and the Obama Regime really cared about the health of Americans they would apply consistency.  Stop the trans fats but allow the tainted food such foolishness.

Basically it is okay to endanger the American consumer to gain export access to China.  American food use to be the safest in the world, now thanks to a spineless, sold-out, commie purchased Congress, and greedy exporters, the food safety will degrade below that of the third-world.

When it comes to food safety the Legislative and Executive branches of government are just as tainted as the poison imported from China masquerading as food.

Posted by Tony aka: PropagandaBuster at 1:27 PM