TIME magazine is fulfilling its role as a mouth organ for the Democratic Party.  As part of the
Compliant news media TIME magazine goose-stepping to the left will do their part to eliminate any Republican Party opposition for Hillary Clintons 2016 Presidential run. 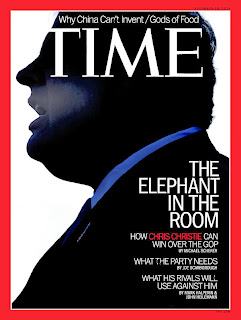 TIME magazine’s latest cover features a silhouette of New Jersey Republican Governor Chris Christie with “THE ELEPHANT IN THE ROOM” written on the image.  Did TIME magazine use that metaphor to note the girth of the governor?

The term “elephant in the room” usually refers to a large object or issue being ignored.  Did TIME magazine use the “elephant” metaphor because Governor Christie is Republican and an elephant is the icon of the GOP (Grand Old Party - Republican Party)?

Of course not, because that would be disrespectful as it was disrespectful to use the “elephant” word in reference to Governor Christie.

Conclusion:  TIME used the “elephant” as a means to cause people to question the governor's weight and by extension his health and ability to be president of the United States.  TIME magazine and their goose-stepping drones in the American news media will disparage anyone thinking of running against Hillary Clinton and her husband Bill.

Posted by Tony aka: PropagandaBuster at 4:54 PM