Cove Guardians may be inciting violence in Taiji, Japan 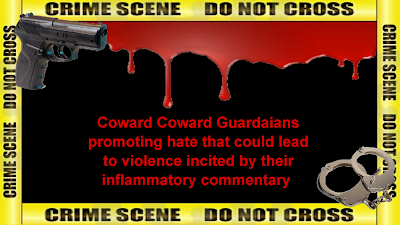 Sea Shepherd Cove Cowards are in Taiji, Japan either purposely or through ignorance could possibly be responsible for inciting violence.

On their Facebook page, Twitter, and live-streaming they purposely use terms meant to draw a hateful picture of those in Taiji involved in the dolphin activity.

While these terms do paint the desired picture these “save the dolphin” thugs desire to elicit money from emotional wrecks around the world, they can also serve to incite one of these wrecks into violence.

On their Facelessbook (“Facebook”) page you can read the comments left by their emotional wreck supporters.  They wish violence and want to cause direct harm to people in Taiji.  While the Cove Guardians are playing with the emotions of these wrecks could it not be possible to incite of these pathetic souls into traveling to Taiji to rid the world of these “murders,” and “kidnappers?”

Would not one of these wrecks find it justifiable to eliminate a “murderer,” or “kidnapper?”  If violence ever occurs, then the blood would be on the already stained hands of the Cove Guardians in Taiji, Japan.

On 13 November, 2013 USA date, 14 November, 2013 Japan date, the Cove Cowards were live-streaming what they claim was a dolphin transfer into a truck.  They claimed the police prohibited from taking pictures, yet curiously enough they were allowed to live-stream.  Melissa the superior of her inferior Cove Guardians said they wanted to get photographs to the dolphin trainers.  Why?

What purpose would that serve other than to provide a target for possible violence incited by the Cove Guardians?  Are these trust-fund babies that ignorant that they cannot relate their hate provoking commentary, with the trainer’s photographs, and emotional wrecks crying to save the dolphins may lead to violence?

Basically such photographs will only server at targets for a possible violent attack incited by the Cove Cowards. 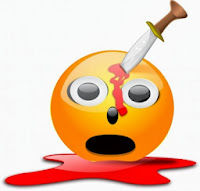 Link to Texas Daddy store:
http://texas-daddy.shop-pro.jp/
Posted by Tony aka: PropagandaBuster at 7:11 PM

Do you realize at all how ignorant this page is? And how terribly misinformed you are? Anyone who takes part in these barbaric dolphin hunts, smiling and laughing while dragging writhing, bleeding bodies to a butcher house.. killing up to 20,000 dolphins a yr.. can only be "pure evil".
SOMETHING TO THINK ABOUT...
Could you imagine what it would be like to be at a family reunion with your entire family and then out of nowhere you were all forced into a closet by people who want to kill you? AND THEN... One by One a family member is pulled out of the closet and murdered in the next room on the other side of the closet door and you could hear everything?
If you could imagine something as horrific as that then you just entered the mind of one of the 75-80 Bottlenose dolphins(just like the famous flipper) that were slaughtered today in Taiji,Japan, with the exception of the 10 they took yesterday to be taken captive for the rest of their life in a dolphinarium somewhere in the world....and the exception of the 10-15 babies that were sent back out to sea that will more than likely die without there mothers who were just killed!
If you do not think anything is wrong with that, then kindly remove me from your facebook as I do not want to know you!

not afraid to call them killers because they are what they are. They seem to be proud of themselves eating in front of a bunch of dead dolphins. Smiles on their faces like nothing. Taiji will always be known as the holocast dolphin slaughtereres killers. Screw them. We have no pity for slaughtering any animal and less dolphins and whales.

What I find amusing is that someone who states that others are ignorant & misinformed, writes a blog so filled with errors, both grammatically and informationally that it shows how unintelligent you are. I feel bad for you and your family that you are so heartless and ignorant. Faceless? That couldn't be further from the truth. Look at yourself through a clear mirror and if your clouded judgment and misguided hateful words is still looking back at you, I truly feel sorry for you.

You are very misinformed. I hope you find some peace of mind in your path. What you are saying to the world does not make sense. Try to see the truth from all sides, then clean up your fiction.