“Dear Leader" of Seas Shepherd was in German custody awaiting a possible extradition to Costa Rica.  As typical in their fashion the cry babies are hinting “Dear Leader’s” current predicament could be a result of some activities from the Japanese. 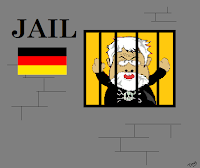 When released from a German prison he held a press conference and of course questioned the possibility of Japanese involvement.


They have to blame Japan as to offer further proof of their hate for the Japanese.  Of course they could not blame “Dear Leader” for his current situation due to his past activities in Central America.  Why he is the leader and the “Dear Leader” could never be responsible for his own actions.  So who to blame?  Blame the nation and the people they and their minions hate:  Japan / the Japanese.


Such accusations contribute to the further notion the cult is made up of spoiled trust-fund babies.  They totally ignore the fact in recent IWC (International Whaling Commission) meeting the Costa Ricans voted against whaling.  Meaning this is not a whaling issue but an issue where Costa Rica is stating Mr. “Dear Leader” broke their law.


Mr. “Dear Leader” was to appear in court in Costa Rica on the charges in 2006, but never showed up as he fled the jurisdiction.  Fleeing seems to be his modus operandi.  He fled the Faroe Islands after 1985 / 1986, he fled the Japanese this past whaling seasons.  All this fleeing from a man who claims he and his minions are willing to forfeit their lives to save the whales.  However his and their actions indicate they are not willing to forfeit their freedom by facing justice or criticism.


Cabin Boy of Sea Shepherd is quoted as saying “Dear Leader” (he did not use “Dear Leader”) fears for his safety should the court rule against him?  Huh?   Where is all that bravado the good Captain demonstrated in “Whale Wars: Viking Shores” when he boasted he was not deterred by a possible arrest in the Faroe Islands (statement made concerning as expired Faroese arrest warrant).


So was the good Captain saying he did not fear a Faroese jail but fears a jail in Costa Rica?  Perhaps in this one situation he is correct.  Wow that was difficult to type…… 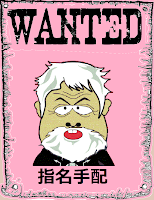 It is disgusting that in order for this group to garner donations from their suckers they have to stoke the flames of hate and racism inhabiting the debts of their depraved hearts.

Posted by Tony aka: PropagandaBuster at 10:57 PM