Feng Jianmei, 23 years old and was seven months pregnant with her second child, was dragged out of her home, beaten, and held hostage by twenty commie officials in Ankang city in northwest China’s Shaanxi province.


Feng Jianmei’s crime was not filling out the paperwork required by the commies and not paying the subsequent fee of around $6,300 to the commies.  These gangsters kept her for three day texting her husband demanding the money.  Her husband did not have the money.


The commies then retrained her, covered her face with a pillow case, then injected her belly into the unborn child with a lethal chemical injection.  Feng Jianme felt the child moving around inside her, after the murderous injection no movement.  The baby was dead and the bloody carcass placed beside her on her bed. 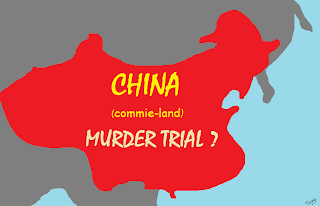 Her cousin photographed the scene, distraught mother, and bloody dead baby besides her.  The photograph was uploaded to the Internet and spread among China’s netcitizens social media like a prairie fire.  The good people of China were outraged and expressed their anger.


The expression of disgust by the people of China caused the gangster commie government of China to issue an apology to the parents of the murdered child (forced abortion).  Big deal!  Did it bring life back to that murdered child?


Per the commies late-term abortions are illegal in China.  So?  Many of the acts committed by the commies in China violate China’s laws and yet they continue to govern by brute force.  Three officials in the town were suspended.  Suspended?  Meaning after the uproar subsides; they will get their filthy jobs back.  How about a trial for murder?


The only good that can be gathered from this story was the huge outcry by ordinary citizens in China expressing outraged by this official murder.