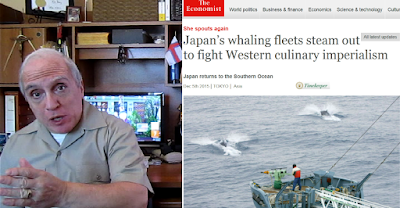 Link to above video:
https://www.youtube.com/watch?v=OtT-mYFV9vQ

Some South Koreans in Seoul protested Japan near the Japanese Embassy.  They were protesting the Japanese whaling fleet sailing to the Southern Ocean to initiate another whaling season.  These protesters claim they are environmentalist.  In essence they are anti-Japanese, a bunch dedicated to Japan Bashing.  If they truly cared about the whales they would be protesting South Korean fishermen.

These protesting South Koreans in Seoul are hiding behind the whaling issue to demonstrate their hate for Japan.

2013 video referenced in this video:
https://www.youtube.com/watch?v=3LC9kj61rXE

Article in reference to the protest:
http://news.yahoo.com/photos/south-korean-activists-protest-against-japans-whaling-fleet-photo-000344424.html

Article pictured in this video:
http://www.economist.com/news/asia/21679603-japan-returns-southern-ocean-japans-whaling-fleets-steam-out-fight-western-culinary

Link to Texas Daddy store:
http://texas-daddy.shop-pro.jp/
Posted by Tony aka: PropagandaBuster at 12:18 PM