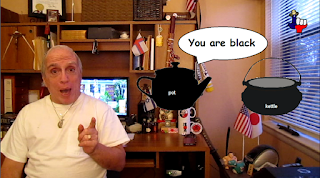 Link to the above video:
https://www.youtube.com/watch?v=B9mC7cCnxl4

Recently the criminal cult leader of Sea Shepherd, his Excellency “Pope Paul the Watson” released another rant on his Facelessbook (Facebook) page (see link below).  The criminal Watson is upset Japan has decided to resume their whaling in the Southern Ocean.  Japan has invalided the International Court of Justice’s ruling banning whaling in the Southern Ocean as the ruling had no bases in law.

Watson wrote the following in part: “Japan is a renegade, outlaw, pirate whaling nation.”  Huh?  An excellent example of the pot calling the kettle black.  How can an outlaw like Watson who is wanted on three continents call Japan “outlaw” or “renegade?”  Watson claimed Japan is a “pirate whaling nation,” once again the pot calling the kettle black.  It was a U.S. Federal Court that labeled Sea Shepherd as “pirates.” 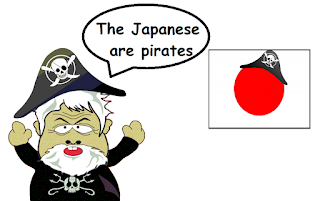 The criminal’s latest ranting once again accused the Japanese government of diverting in part donations made by people around the world to the victims of the 2011 tsunami / earthquake to subsidize the whaling industry.  That is an absolute lie.  All the money donated to the earthquake/tsunami relief went directly to help the victims.  The money from the government to subsidize the whaling industry comes from the Japanese government, the Japanese tax payers.  If you are not a Japanese tax payer, and the criminal is not, then mind your own business.

In the past the criminal using a fake law-enforcement badge sailed into the Southern Ocean pretending to be an officer of the law.  When will Watson announce he will be going to the Southern Ocean this year to stop the Japanese whaling fleet?  Remember the main reason people donate money to Sea Shepherd is for them to maintain a fleet of vessels to protect the whales.  So where is this protection?

Can an announcement be forthcoming from the floating circus concerning a Southern Ocean operation?  Or are they in fear of the possibility of some type of military / police / coast guard escort for the Japanese whaling fleet?  Sea Shepherd in the past has boasted they were willing to surrender their freedoms to save Watson’s clients the whales.  Where is that bravado this whaling season?

Below is a link Sea Shepherd minions / suckers to continue to donate to Sea Shepherd.  Such donations lead to providing material for these videos.  The donated money will also hopefully go towards awarding Mr. Ady Gil monetary judgements concerning pending lawsuits.

Posted by Tony aka: PropagandaBuster at 6:54 PM