Hey Hillary, is it the Donald or Bill? 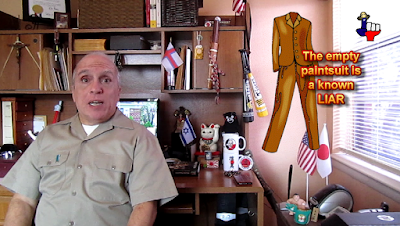 
Hey Hillary, is it the Donald or Bill?

During the Democratic Party debate on December 12th, 2015, Bill’s wife (Hillary Clinton) made an unsupported accusation (a lie).  Hillary Rotten Clinton claimed ISIS was using Donald Trump in their recruitment videos because of his vitriolic comments in reference to terrorists.

Soon afterwards Donald Trump called the liar a liar.  He stated Hillary told a lie when she bellowed that statement.  As of that debate there was no known ISIS recruitment video mentioning or showing Donald Trump.

When Bill’s wife Hillary made that accusation was it a lie or a Freudian slip?  Perhaps Hillary fantasies having the Donald as her husband as oppose to Bill.

Link to ISIS recruitment video with Hillary’s husband Bill (fornicating Bill is at the 0:47 mark):
https://www.youtube.com/watch?v=mkXQ1NYZQII

Link to Texas Daddy store:
http://texas-daddy.shop-pro.jp/
Posted by Tony aka: PropagandaBuster at 10:17 AM