Senkaku Islands, Japan, USA, China
All over China there are massive demonstrations and riots.  The mobs are upset with Japan.  Recently the Japanese family owning the deed to the Senkaku Islands (also known as Diaoyu Islands in China, and Tiaoyutai Islands in Taiwan or the Pinnacle Islands) sold the islands to the Japanese government.

In 1969 the Communist government of China produced a map showing the Senkaku Islands as belonging to Japan.  The islands only became disputed when it was thought the waters off the islands contain huge deposits of oil and gas.  That is when the commies claimed the islands belonging to China.  Seems like recently anywhere in the waters off Asia where oil or gas or discovered or thought to be, those waters and associated islands become part of China.  If oil or gas is ever discovered in Manila, then Manila in the Philippines will become part of China, according to the belligerent commies in China.
The Senkaku Islands were administered by the USA during the occupation of Japan (Occupied Japan) after World War Two.  China never objected to the USA occupation of those islands both before and after the communist stole power in China.  The USA Air Force used some of the Senkaku Islands as a bombing range and the communist in China never objected never said to stop bombing their islands.


The commies only claimed the Senkaku Islands AFTER oil and gas deposits were discovered.  The commies allowed the peasants in China to riot against Japanese business to redirect their hate towards the scapegoat Japan.   The recent belligerent commie behavior was one of a few reasons the conservative party recently won elections in Japan, the LDP – Liberal Democratic Party.


The commie bullies in China have island claims against Vietnam, Malaysia, the Philippines, Brunei, and Japan.  The commies are using their military and economic might to bully their neighbors, steal land and waters which were never part of The Middle Kingdom.


Recently China’s commie General Xu Caihu, vice chairman of the Central Military Commission was quoted as saying that military forces should be “prepared for any possible military combat.”


China is upset with the USA also.  Because the USA will install in Japan a second missile defense radar system.  What is it about the word “defense” that upsets the commies?   Hmmm?


Commentary about the island dispute:
http://www.dailycampus.com/commentary/chinese-invasion-of-senkaku-islands-unjustifiable-1.2904434


Treaty of Mutual Cooperation and Security between the United States and Japan:
http://en.wikipedia.org/wiki/Treaty_of_Mutual_Cooperation_and_Security_between_the_United_States_and_Japan


Brief history of the Sankaku Islands:
Chinese name Diaoyu dates to the Ming Dynasty – 14th – 17th century
In the 1800’s the British named them the Pinnacle Islands.
1900 - named Senkaku Retto by Japan which means Pinnacle Islands
1879 - annexed as part of the Okinawa Prefecture (Japan)
1885 - Japanese governor appointed
1895 - Sino-Japanese War – the treaty ending that war it is argued gave control of those islands to Japan
The “Treaty of Shimonoseki” - 1895 ended above war (articles 2 and 3)
After WW2 the Islands with Okinawa came under USA control
1951 - Treaty of San Francisco – article 3 included the islands
1952 – Treaty of Peace between the Republic of China and Japan – article defers to the San Francisco Treaty in reference to items not provided for in the treat between Japan and China.
1969 – the UN indicated the possibility of large oil and gas reserves around the islands
1971 – Taiwan asserted claim, 6 months later China made same assertion
1972 – USA hands Okinawa and the Islands back to Japan.  The operative word being “back” meaning the islands belonged to Japan. 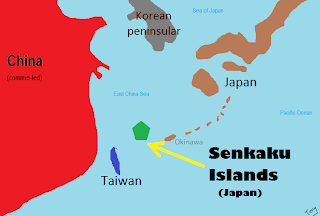 Posted by Tony aka: PropagandaBuster at 4:34 PM