Save the dolphin crowds follow Stalin, Hitler, and Mao

The "Save the Dolphins" crowd follow
Stalin, Hitler, and Mao


Further proof the “save the dolphin” crowd / Sea Shepherd supporters are following the tactics of their heroes Stalin, Hitler, and Mao by going after the children to indoctrinate and turn them against the parents.  These drones must be challenged for their evil intentions.
(below from the Facebook page “Sea Shepherd Cove Guardians Page (official).”
The photos below the comment was added by me (Tony). 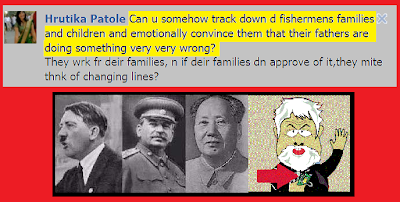 Posted by Tony aka: PropagandaBuster at 10:50 AM