Cults and tyrants go after the children first

Cults and tyrants go after the children first

Sea Shepherd Cove Coward supporters urging their fellow drones to follow the tactics of their heroes Hitler, Stalin, and Mao, by going after the children first to indoctrinate.


These pathetic people have been passing messages to contact Japanese boy bands and popular youth entertainers urging them to protect a save the dolphin message.  The goal being turn the children into mindless save the dolphin drones.
Below a screen shot from the Facebook page: 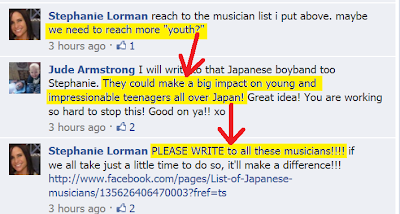 Posted by Tony aka: PropagandaBuster at 7:18 PM