Sea Shepherd sued suing or sooie over the Ady Gil

Sea Shepherd, sued, suing, or sooie over
the Ady Gil 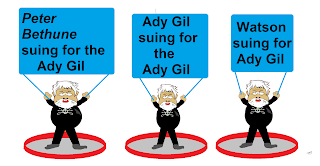 In the first ring of the circus is Pete Bethune suing Sea Shepherd / fugitive Watson for $500,000 owed to him for the Ady Gil.


In the second ring of the circus Mr. Ady Gil is suing Sea Shepherd for abandoning the Ady Gil in the Southern Ocean.  Mr. Ady Gil donated the money to purchase the vessel.

In the third ring Sea Shepherd is suing The Institute of Cetacean Research – ICR, for what they claim the Japanese whaling vessel ramming their vessel the Ady Gil.


Problem with the act in the third circus ring:  In a communique dated August 28, 2012, fugitive Watson wrote:


“The crew was recruited by Pete Bethune to help man his vessel, the Ady Gil, and were not Sea Shepherd crewmembers”


If according the Watson on August 28, 2012 the Ady Gil belonged to Pete Bethune and not Sea Shepherd, how can he sue the ICR for damage to a vessel now owned by Sea Shepherd?


Music:  “Entry of the Gladiators,” from JewelBeat.com.
Videos of the Southern Ocean activity from The Institute of Cetacean Research – ICR.

Posted by Tony aka: PropagandaBuster at 9:09 PM