Currently the rust bucket garbage scows of Sea Shepherd with their crew of smug, self-righteous bullies are in the Southern Ocean.  They are there with their stated goal to harass and interfere with whaling by the Japanese mariners.


In Sea Shepherd’s attempt to maintain the public relation edge they have issued two pronouncements void of proof.  No problem because the compliant Australian news media has been reporting what Sea Shepherd announces as solid proof with no proof provided.


Lie number one:
Sea Shepherd claims the Panamanian vessel the Sun Laurel has been intercepted and prevented from supplying fuel to the Japanese mariners.  Claiming a Japanese vessel was dead in the waters without the much needed fuel.


1 - A photograph of a container they claimed is diesel fuel they retrieved from the ocean that was leaked by the Sun Laurel.


2 – Sea Shepherd released a recorded radio transmission between the Sun Laurel and the Japanese vessel.  This recorded transmission was released on a video showing photographs in the background, with the recorded audio in English and English subtitles.


Here is the link, view and listen for yourself:
http://www.youtube.com/watch?v=jo5tpkx3PLE


Sea Shepherd while violating the U.S. Court injunction which was upheld by the U.S. Supreme Court by sailing within five-hundred yards of a Japanese whaling vessel, claims the Japanese attempted to ram them.  Really?  Where is the video?


It is well known Sea Shepherd has an abundant supply of video cameras so how come no videos to support their two most recent lies have been released?


Sea Shepherd:  Either produce the videos or shut up. 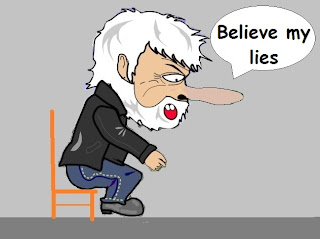 Posted by Tony aka: PropagandaBuster at 3:30 PM