The self-righteous smug bullies of Sea Shepherd’s Cove Guardians took a break from harassing the locals in Taiji, Japan.  In two rented vehicles they followed a truck from Taiji to Osaka, about a three and a half hour drive. 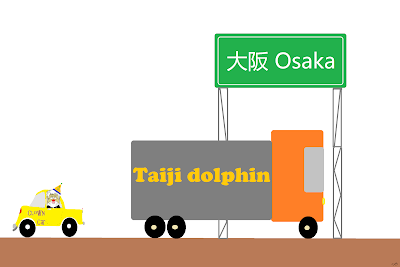 According to the hallucinations posted on their Facebook page the bullies claimed there were four dolphins in the truck to be loaded on a boat and ship to Russia.  Then the bullies changed the dolphin’s destinations and claimed they were going to be transferred to Hiroshima.


Geography lesson here:  Osaka is northeast of Taiji, while Hiroshima is west of Taiji.  So why did the truck travel three and a half hours east to ship their cargo west?


During this so-called following / chase, once again the Cove Coward Guardian bullies lost the truck again.  The last time they lost the truck was a few weeks ago in Tokyo.  This trip when the cowards lost the truck, they are now blaming the police.  These people never take responsibility for their pathetic, inept actions.


Basically what happened was bunch of hippies from the West took a joy ride through the beautiful Japanese countryside at the expense of suckers around the world.
What is interesting is they now accuse the Taiji truck of wasting money on fuel attempt to shake off the Cove Guardian bullies.  What about the money the Cove Guardian bullies spent on fuel to chase a truck they lost?  TWICE!


All is good because the money the Cove Guardian bullies spend on fuel is money spent in Japan – ha ha ha.

Posted by Tony aka: PropagandaBuster at 3:30 PM

Cove guardians pay their own way, they are not using donations, get you facts straight before you accuse people, you sound like the bullie to me.
Do you support the capture, enslavement, torture and slaughter of dolphins?

Cove guardians pay their own way, they are not using donations, get you facts straight before you accuse people, you sound like the bullie to me.
Do you support the capture, enslavement, torture and slaughter of dolphins?