China about to claim another Japanese island

China about to claim another Japanese island


Minami-Tori-shima (南鳥島) or Marcus Island or Minamitorishima is an atoll located in the Pacific Ocean about  1,148 miles southeast of Tokyo, Japan.  The ownership and claims to the atoll have switched between Japan and the United States over the years.
The island was returned to Japanese control in 1968.  Rare Earth minerals (REE) have been discovered in the waters off the island, enough to supply Japan for the next two-hundred years.  Rare Earth minerals are essential in the production of many electronics, thus important to the economy. 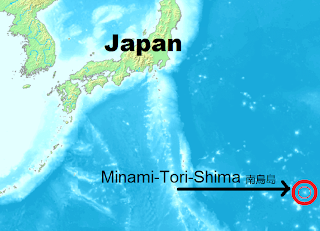 Now that this mineral has been discovered it is only a matter of time before the commies in China claim they have an ancient map detailing the island belonging to an ancient Chinese dynasty.  It seems like wherever natural resources are discovered anywhere in Asian or Pacific waters,  the commies manage to locate a map claim the waters / island belong to China.
Posted by Tony aka: PropagandaBuster at 5:05 PM

I doubt not.
This is typical CCP way.

Did you know that some nationalists in Asia are planning to boycott Japanese goods in behalf of their stupid pride?