Poem by Neil Cornell.
Art work by: Jogvan A. Hovdanum.
Both of the Faroe Islands.
Voice: Tony Marano of Texas, USA.

Disclaimer! This satirical poem is based on the illegal, immoral and hate filled actions of Paul Watson and his Sea Shepherd cronies towards the Canadian sealing industry and an unjustified attack on the Yupik people.  Certain situations are fictitious and have been added to bring levity and mirth to his pathetic attempts to disrupt the legal and sustainable use of natural resources by local people.

The whalers, the sealers, the salmon farms too, all function sustainably: nothing is new. 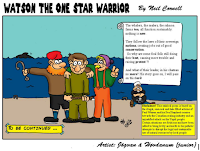 They follow the laws of their sovereign nations, creating jobs out of good conservation. So why are some foul folk still doing their best, causing more trouble and raising protest?! And what of their leader, in his chateau no more? His story goes on, I will pass on this lore!

He lurks in Vermont, now stripped of his violence, still not possessing a captain’s license! Dirty diapers he changes, they come from his child.  He wipes and he washes, then leaves them in piles!
All alone and forgotten, crying out for attention, promoting himself at a comic book convention! He whines and complains, he smirks and he scowls, “Not enough of my minions are donating now!”

Obscurity beckoned, the future seemed grim, but Watson’s great ego reached out on a whim.
“I now have a plan to that will come to fruition: I’ll build a sweat lodge, and seek out a vision!”
Appropriation of cultures was nothing so new, to the schemes of the Paulrus and his bad attitude.
“I must generate income, my bank account’s ravaged, by all these lawsuits, I must play Noble Savage!”

He cut down some saplings, constructed a frame which was covered in blankets, this man had no shame. He build a great fire to warm up the stones, emitting much carbon to the atmosphere’s home.
To top it all off and add to this mess, the ceremonial thief wore a tinfoil headdress.
“I will sweat and I’ll suffer, in this structure I’ll stay, ‘till a spiritual guide will show me the way.”

Time passed in the lodge, Watson ran up a fever, then received a visit from Bucky the Beaver!
When Watson was young, Bucky was a best friend, yet due to some trappers, Bucky came to an end!
Now his spirit returned, all misty and pale, the trap that had killed him still attached to his tail!
The ethereal beaver then growled out a warning, but Watson was unused to such a stern scorning.

“Shame on you, and your minions I see.  You claim to save nature but you didn’t save me.
The vaquita is dying, Baiji dolphin’s extinct, you never help species so close to the brink.
Instead you spread hate on the good Faroese, the Canadian sealers, and the Japanese.
The species they hunt are not critical, their populations are stable, and sustainable.”

“Your decades of rage don’t support conservation, and have finally led to your alienation.
This is your last chance to change up your mission, here is your name to fulfill your vision.
To face these new battles and what is in store, you are now the One Star Warrior!”
“Nonsense,” said Watson, “I’m still a fanatic, my body has just become geriatric!”

“I won’t go on campaigns, I feel that is fine.  Instead I’ll fight my battles online!  I’ll take on my enemies with a click of the mouse, comfortably sitting in a room in my house.  I’ll visit Facebook and resume all my hating, giving sites I despise a one star rating!  The online petitions, I’ll sign as I go, the chefs who serve seal meat will have ratings low!”
“One Star Warrior, with my ratings I’ll end, the seal industry, the pups I’ll defend.Watson blathered and blogged, he posted with pride, no urging he needed, and jumped in his ride.  “My Dodge Ram is large, I don’t give a hoot, about its emissions, and how it pollutes!”  “To town I will go, now hear my war cry: One Star Warrior, I demand your WiFi!”

Wielding his laptop, his fury provoked, restaurant invaded, to his minions he spoke!”
“We need a new mission to get more attention, the whitecoats aren’t killed, but this we won’t mention! “Emotion and mistruths, these both will suffice, I’m sending my wife forth to pose on the ice!”  “She will drive away mothers, manhandling pups, harassing the seals with my plan so corrupt!”

“Yet we need more exposure with our plan laced with shame, we’ll use a Hollywood actress with fame!” Jenny Rodriguez volunteered to come with, to further her fame and support Watson’s myth.
Her qualifications were very bizarre: she portrayed a tree hugger in the film “Avatar.”
GO NORTH! Oh you lovelies with your passion and zeal, now disrupt the mothers nursing their seals.

His plan now in place and more money donated, Watson went back to posting about nations he hated.
He ranted and raged, he condemned restaurants, for serving seal meat that their patrons did want.
In his limitless ire, old Paul failed to see, he was giving the sealers free publicity.  Food critics applauded, boutiques sold seal clothing, his plan had backfired, Watson fell into loathing.

“By Neptune’s great beard!” Watson said with dismay. “I will get more donations, I will go and cosplay!”  “More money I need,” he grumped and he griped. “I will wear this dark jacket and give myself stripes!”  He primped and posed, he went to some functions, stood for photographs, he showed his dysfunction.  “I’m the warrior One Star, a captain I’m not, I just make a persona right up on the spot!”

Then one day the old Watson woke up from a snooze, logged on to Facebook and looked at the news.
He gasped and he grimaced at the pictures in dread, a young Yupik had killed a giant bowhead.
So the ire and anger, it grew more and more, inside of the Watson “One Star Warrior!”
He unleashed a great rant on his personal page, towards all whaling nations with an unbridled rage.

The cursing, the damning of this youthful Yupik, defied all decorum, it made readers sick!
In such blind emotion, old Paul failed to see, that Agragiiq was feeding his community.
Nevertheless, the hate speech remained, then Paul took it down, his ego was maimed.
With a pain in his chest, the pirate fell to the floor, he lay there unconscious, his heart beat no more.

The Captain of Cosplay had his arteries clogged, by eating cheeseburgers while he angrily blogged!
Watson’s ghost rose as a shadow now loomed, the Grim Reaper had come for this hapless buffoon!
He was dressed in a robe made of spotted seal skin, on his scythe were impaled fresh pieces of grind.
Death beckoned to Watson to come with him now, but the fugitive poet let out a sad howl!
“You have the wrong man, my demise cannot be, I can’t leave behind my donations you see!”
He begged and he brokered, “If you leave me alone, I’ll make you a deal and compose you a poem!”
Death was insistent, his decree was unfurled, it was clear that Paul Watson was not long for this world.  Yet a light shone forth strong, the Reaper recoiled, a figure appeared, his plan was now foiled!

“REEEEAAALLLY?!”  he shouted, in sarcastic glee, I’m Tony Marano, now listen to me!

“Pope Paul the Watson, if away you should go, I’ll have no material for my next video!”  “The suckers’ donations will all but diminish, no hijinks from minions, I’ll be all but finished.”  “Oh pathetic cult leader, I’ll help you I will. That’s it kids!  I’ve a task to fulfill!”

Texas Daddy knew well how to bring Watson back, from the Realm of the Dead, he had such a knack.  Producing a diaper soiled by the infant, waved it under the nose of the pirate now spent.
The stench and the stink of the contents within, aroused the fake captain, his heart beat again!
Death roared in disdain, then suddenly vanished, for he knew he was routed, and had to be banished.

When Watson awoke from his frightful ordeal, Tony Marano began his appeal.
“Since I saved your life, can you do one thing more?  Can you sell me a t shirt from your online store?”  “Never!” said Watson, the keyboard badass.  “Sea Shepherd apparel you’ll never possess!”
“I’ll go back online with clever new handle, and give a thumbs down to your YouTube channel!”

“You do that,” said Tony, all full of fine glee.  “I now have material to mock you, you see?!”
“Now let me present you with a band that’s named “TYR,” they’ve a message for you that is very clear!  Paul’s mouth gasped in horror and he knelt to the floor, as Heri and friends played “Rainbow Warrior!”  Their song invoked memories that refused to cease, of how old Paul had been sacked from Greenpeace!

“O criminal cult leader,” Tony then said, “Go back to you home and cower in bed.”
“You don’t have the right to disrupt sealing nations, or decent, good people who harvest cetaceans.”
“End the scams and the smears, the emotion laced lies, wearing conservation as a financial disguise!”
“Stop your hatred, the anger, the racist rants long, call back your minions and admit you were wrong!”

Watson jumped in his truck that billowed black smoke, with malevolent wrath he spat as he spoke.
“The warrior One Star will still have his day, I’ll shape and I’ll shift as I run away!”
As he drove to the ocean he bulked and he bloated, then came to the beach from the cab he unloaded.
Where a pirate once stood was Watson’s new shape, it was that of a walrus to help him escape.

“Donate now!” it did bellow, “At last I am free, you can’t have my cash and you’ll never catch me!”
The last time he was seen was close to the land, in White Cap Harbor, Griquet Newfoundland.
So where lives the Paulrus, does he still read the news? Does he visit websites and post nasty reviews?  In all truth, none of us really do care, as long as he continues to avoid our affairs! 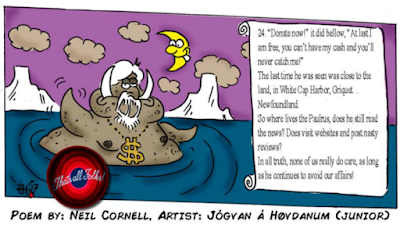 Posted by Tony aka: PropagandaBuster at 3:43 PM