The above groups are all reprehensible; there is nothing good about their mission, their ideology, and / or their adherents.   There has never been such a thing as a good person actively belonging to any of the above groups / gangs.

The rally that happened in Charlottesville was to protest the removal of a Confederate War memorial statue.  The first three groups mentioned above were there to oppose the removal.  Among this group were also people who were not members of these hate-groups, but do have a genuine concern for keeping the memorial in place.  It represents history to them and pride concerning their heritage.

The group opposing the rally falls into the last three groups in the above list.  They arrived looking for violence as their past history has demonstrated.  Also with anti-Confederate memorial group were people not members of the bottom three groups, but they too have genuine concern opposing the statue.

In essences it is wrong to paint with a broad brush stating all in either group were evil and beyond redemption.  Each side as stated did have some people with good genuine concerns and their intentions should not be overshadowed by the violence and hate.

The news media, Democrats, late night entertainers, talking-heads, the establishment, and Republicans will have you believe only the Nazis, KKK, and White Supremacist were they only evil ones and should be solely held responsible and criticize.  All this while ignoring the evil intention by the attending Antifa, Communist, and BLM.  These groups are protected.

President Trump on about three occasions did state the hate and violence on both sides was wrong.  This upsets the news media and their ancillary soft-coup co-conspirators.  They want Trump to mention the groups they hate and never allude to their protected groups.

Trump said “There are fine people on both sides,” this threw the conspirators into media frenzy.

There is a coup d’état taking place to overturn the results of the last presidential election.  This is disturbing and not being opposed.  This is the death of governance in the United States as founded and as we use to appreciate.

In the August 16, 2017 edition of The New York Times, a front page article read in reference to President Trump, “Giving White Nationalists An Unequivocal Boost.”

That is a pure lie by The New York Times.  During President Trump’s news conference he did not utter any words one could claim were in support of White Nationalists.  This is an excellent example of the pre-planned strategy to overtime the previous presidential election. 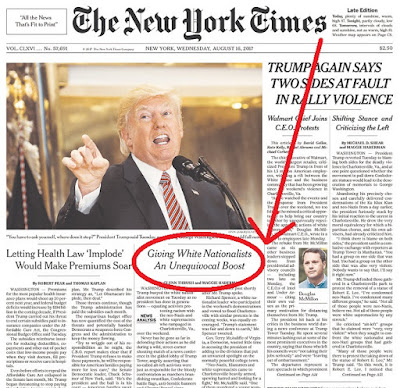 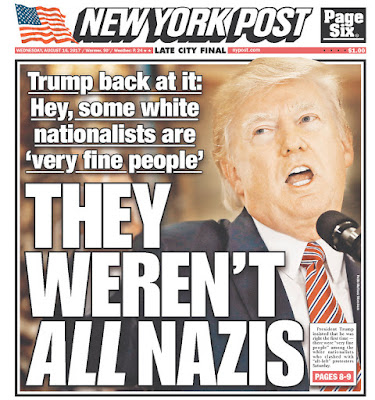 Posted by Tony aka: PropagandaBuster at 7:33 PM