Terrorism in China by the Uyghur’s in Xinjiang China real or a commie ruse? REPOST 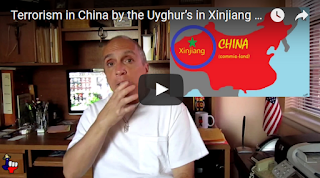 Click the link below to see the video illustrated above:
https://www.youtube.com/watch?v=5eOwKBfozjk


Terrorism in China by the Uyghur’s in Xinjiang China real or a commie ruse?  REPOST

In the Western region of Xinjiang in commie-led China charges of terrorism on the part of the Muslim Uyghur population are being thrown.  The Uyghur’s (Uighurs) a Muslim group dating back centuries in the region are now a minority ethnic group in their own region.  The commies have successfully diluted their numbers by incentivizing ethnic Han Chinese to migrate into the region.

The commies behaved in Xinjiang as commies do the world over: they proceeded to eliminate the Uyghur culture, religion, and language.  See anything not commie must be disposed of.  No loyalty or identity to a culture, religion, or language, only to the commie state.

Now the commie authorities are telling the world the Uyghur placed a bomb in a restaurant killing many civilians.  Also a Uyghur group commandeered a truck and proceeded to run over and murder Chinese civilians.  The Chinese mob got hold of one of the Uyghur and murdered him on the stop.  The rest ran, when police caught up with them, they were executed immediately.

Now we have a murderous incident if true now means the Uyghur crossed from freedom fighter to terrorist.  Any time civilians are target by a non-military group that is terrorism.  Terrorist are lower than commies and should be shunned by civilized people around the world.  If this incident is true one may understand the desperate situation the commies placed the Uyghur people, however resorting to terrorism sickens civilized people.

Was this incident truly perpetrated by Uyghur people?  Where is independent verification by the foreign press?  What a joke because when any foreign journalist ventures independently into the Xinjiang region they are met with severe harassment by commie authorities.  So then why would the commies stage this event to blame the Uyghur people? The commies want to resettle (move) about 200,000 nearly all Uyghur from the old city of Kashgar.  Could this incident be used as another excuse to move them?

Or since many Uyghur freedom fighters learn their bomb making skills to explode at commie government installations in camps located in Pakistan.  Once this incident erupted the commies were quick to blame the camps in Pakistan demanding the Pakistani government prevent further terrorist activities.  So could this have been staged to eliminate those camps?

One will never know since the commies murder supposedly those involved and no independent verification is permitted in The Middle Kingdom, commie-land, commie-led China.  Our hearts and prayers go out to the Uyghur people, the Tibetan people, all those suppressed in China by the commies just because of their culture, and for the average Chinese citizens enduring this repressive regime.

Right at the end of this video appears the phrase: “Better dead than RED.”  That is a term borrowed from 1950’s America during the Cold War.  People professing rather be dead than to live under a communist regime, still a valid sentiment in this twenty-first century.

Previous videos posted about the Uyghur’s in Xinjiang region of China:
http://www.youtube.com/watch?v=3rRXPdpBFhw&feature=channel_video_title

NOTE: This video was first uploaded on August 3, 2011.  It has been attacked by gremlins ruining the aspect ratio.  This is a correction to what the gremlins did.

Link to Texas Daddy store:
http://texas-daddy.shop-pro.jp/
Posted by Tony aka: PropagandaBuster at 5:16 PM