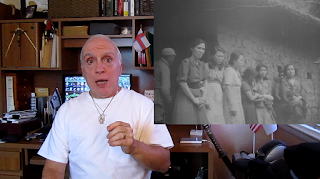 The women were in fear and terrified because they were just captured by the enemy: Chinese troops.  If they were truly held against their will by the Japanese, they would not have  ”tremble in fear”….and…”have terrified looks on their faces.”  They were in fear for being caught collaborating with the enemy, the Imperial Army of Japan.

This is a purposeful gross misinterpretation of the film.  The original film was silent without any narration written or verbal on the film.  However the documentation attached by the U.S. military in 1994 states they were “Chinese.”  If they were truly held captive as sex slaves, then why did the Chinese hold them as prisoners of war?  People who are rescued are not held as POWs.  Proof:  The Jews freed from the Nazi concentration camps were liberated not held as prisoners of war.

Link to Texas Daddy store:
http://texas-daddy.shop-pro.jp/
Posted by Tony aka: PropagandaBuster at 1:28 PM