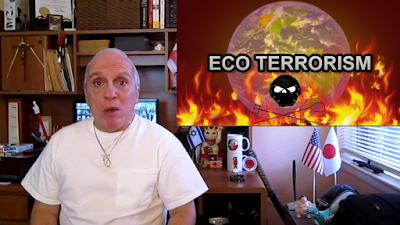 Click on this link to view the above video:
https://www.youtube.com/watch?v=bEKNGt6UN6Y

The criminal cult leader of the floating circus known as Sea Shepherd, cosplay Paul Watson recently uploaded a commentary to his Facelessbook (Facebook) page.  He starts the commentary with:

Further into the commentary he wrote the following:

“Me: I am indeed ashamed, I never imagined that he would leave Sea Shepherd to work for an eco-terrorist organization but I understand the temptation, the money he makes is incredible although I certainly don’t condone what he is doing.  Sea Shepherd opposes eco-terrorism.”

He opposes eco-terrorism?  Such an opposition is rather hypocritical since Sea Shepherd has been labeled as committing acts of “eco-terrorism” by the FBI (Federal Bureau of Investigation).

Here is part of the FBI’s testimony before a Congressional subcommittee on February 12, 2002:

“Since 1977, when disaffected members of the ecological preservation group Greenpeace formed the Sea Shepherd Conservation Society and attacked commercial fishing operations by cutting drift nets, acts of "eco-terrorism" have occurred around the globe.”

Cosplay Watson’s commentary was due to one of Sea Shepherd’s members left the floating circus (Sea Shepherd) and started to work for British Petroleum (BP).  Since BP extracts oil from the earth according to criminal Watson that means the company is engaged in eco-terrorism.  The FBI has not labeled BP but did label Sea Shepherd as committing acts of “eco-terrorism.”

Link to Texas Daddy store:
http://texas-daddy.shop-pro.jp/
Posted by Tony aka: PropagandaBuster at 12:22 PM