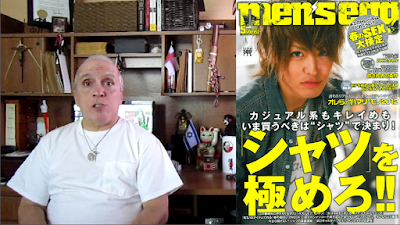 Click on this link to view the above video:
https://www.youtube.com/watch?v=ZyhEmdtqnHA

An Italian actress of sorts named Nadia Toffa recently went to Tokyo, Japan looking for pornography and thinks discovered pedophilia there.  Once in Tokyo this Italian went to the Akihabara area seeking her pornography.

Akihabara is a district in Tokyo noted for electronic goods, video games, anime, manga, computer goods, and maid cafes.  Maid cafes are where young waitresses dress in cosplay French maid outfits.  Some are on the streets in Akihabara soliciting customers to their cafes.

Upon seeing the Maid café waitresses on the street the Italian actress concluded they were a magnet for pedophiles.  Huh?  Apparently Nodia Toffa is unfamiliar with Japanese women.  Japanese women look years younger than their actual age.  So out of this ignorance Nodia Toffa expanded on an unfounded supposition.

If Nodia wanted to hunt for pornography perhaps looking in Italy would have saved traveling to the other side of the globe.  Walk through the Vatican museum and one would think they were in a male-endowment museum.  Many statues there and throughout Italy explore the male form in total nudity leaving nothing to the imagination.

Recently Iranian President Hassan Rouhani made a visit to Italy and subsequently an Italian museum.  Not to offend the cleric museum officials hid possible offending statues behind plywood.

Link to Texas Daddy store:
http://texas-daddy.shop-pro.jp/
Posted by Tony aka: PropagandaBuster at 10:49 AM