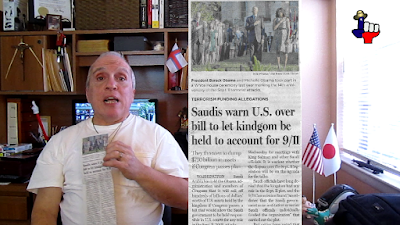 “Saudis warn U.S. over bill to let kingdom be held to account for 9/11,” appearing in The Dallas Morning News reprinted from The New York Times.

Note:  “kingdom” did appear as written in The Dallas Morning News when the correct word is “kingdom.”

As written in the article:

“……if Congress passes a bill that would allow the Saudi government to be held responsible in U.S. courts for any role in the Sept. 11, 2001 attacks.”

Because of this pending legislation Saudi Arabia has threatened to “sell off hundreds of billions of dollars’ worth of U.S. assets held by the kingdom…..”

Why would this pending legislation upset the Saudi Arabian kingdom if they truly had nothing to do with the savage September 11, 2011 attack committed by savages?  Sure 17 of the 19 savages that killed close to three-thousand Americans on 9/11 were from Saudi Arabia, but that does not confirm Saudi Arabian government involvement.

All though many throughout the years have held the Saudi Arabia kingdom responsible, still no smoking gun has indicated them.  However now with their opposition to this legislation one has to wonder.  If Saudi Arabia truly had no involvement in the planning and/or execution of the savage attack on 9/11 then such legislation should be meaningless to them.

Article referenced in this video:
http://www.nytimes.com/2016/04/16/world/middleeast/saudi-arabia-warns-ofeconomic-fallout-if-congress-passes-9-11-bill.html?_r=0

Extensive article on this issue:
http://www.dailymail.co.uk/news/article-3544865/Former-senator-blasts-Saudi-Arabia-9-11-links-suggesting-officials-against-bill-worried-kingdom-s-ties-terrorists-revealed.html

Link to Texas Daddy store:
http://texas-daddy.shop-pro.jp/
Posted by Tony aka: PropagandaBuster at 12:35 PM