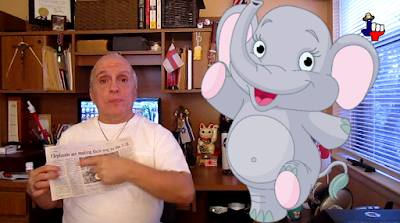 Click on this link to view the above video:

Animal welfare / animal rights all care about saving and caring for the animals of the world.  Nonsense!  Not all of the groups hiding behind the “we care for animals” façade have concern for animals as their number one concern.  Many are just pure anti-capitalists and / or bullies.

An article appearing in The Dallas Morning News dated March 9, 2016 titled “Elephants are making their way to the U.S.” exposes the subterfuge behind some of these disingenuous groups.  The African nation of Swaziland is suffering from a severe drought.  Resulting in a reduce amount of vegetation needed to feed the elephants.

The Dallas Zoo with a few other zoos agreed to import around eighteen elephants to their zoos to saving these pachyderms (elephants) from starvation.  Not so fast!   Friends of Animals filed a law suit to stop the transfer of the elephants from Swaziland to Texas.

Their complaint involves their desire not to see any profit made by saving the lives of these elephants.  No problem if the Dallas Zoo or the king of Swaziland did not make a profit.  However since a profit will be made the transfer / sale must be blocked.

The profits made at the zoos in relation to the elephants go to their upkeep, health, and feed.  Never mind that because “profit” is the enemy and anti-capitalism is the true motive.  A sinister reality exposed.

Article referenced in this video:
http://thescoopblog.dallasnews.com/2016/03/elephants-making-their-way-to-dallas-zoo.html/

“Friends of Animals” website lament about “profit” related to these elephants (read next to the last paragraph):
https://www.friendsofanimals.org/news/2016/february/friends-animals-files-lawsuit-stop-import-18-elephants-us-zoos-swaziland

Link to Texas Daddy store:
http://texas-daddy.shop-pro.jp/
Posted by Tony aka: PropagandaBuster at 10:36 AM