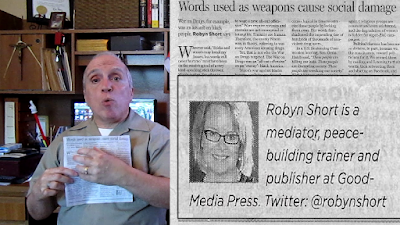 Click on this link to view the above video:
https://www.youtube.com/watch?v=7dWmm6tbAXA

A column appearing in The Dallas Morning News titled “Words used as weapons cause social damage,” leads one to believe only black Americans are afflicted with drug abuse.

The columnist Robyn Short quotes notable conservatives such as Presidents Richard Nixon and Ronald Reagan as proof the war on drugs was directed at black Americans.  The problem with her line of reasoning the quotes she used of Nixon and Reagan are totally void of any mention of race and / or skin color.

The subtitle to her column was:

“War on Drugs, for example was an assault on black people.”

Does that mean Ms. Short believes only black Americans are using illegal drugs?

“Consider the language of Presidents Richard Nixon, Ronald Reagan…..used to declare war on drugs……Nixon’s aide John Ehrlichman said the War on Drugs was designed as a political tool to fight blacks and hippies.”

How is quoting John Ehrlichman proof of Nixon’s racism?

Continued quote from the column:

“….Nixon stated: ‘America’s public enemy number one in the United States is drug abuse.  In order to fight and to wage a new all-out offensive’”…………….  Ms. Short interpreted that to mean “….all-out offensive on an enemy: black America.”

Where did she get “black America” when Nixon never mentioned it?  Could this be another example of liberals thinking only blacks suffer from drug abuse?

Numerous other quotes by Nixon and Reagan appear in the column, never once mentioning race or skin color.  Yet Ms. Short continued to read “black Americans” in the quotes she quoted that did not appear within.  The column is obviously an hallucination masquerading as a political analysist.

Column referenced in this video:
http://www.dallasnews.com/opinion/latest-columns/20160407-robyn-short-violent-political-rhetoric-leads-to-violent-action.ece

Link to Texas Daddy store:
http://texas-daddy.shop-pro.jp/
Posted by Tony aka: PropagandaBuster at 11:01 AM