The floating circus known as Sea Shepherd is currently preparing to illegally harass the Japanese mariners in the Southern Ocean.  One of Sea Shepherd’s rust-bucket garbage scows is in Hobart, Tasmania, Australia.  This is the garbage scow inhabited by Peter Helmethead also known as “Cabin Boy.”

On the dock where the rust-bucket is polluting a lady left a package.  The Cowards on the floating circus became alarmed and riddled with fear telephoned the local constabulary (police).

Remember now these cowards of Sea Shepherd claim to be fearless while hurling projectiles composing of acid in glass bottles.  This results in splattering broken glass on the slippery decks of the vessels belonging to the Japanese mariners.  The floating circus has thrown flairs causing fires on the decks.  The clowns also attempt to disable the Japanese vessels in a desire to leave the Japanese mariners on a stranded vessel in the frigid waters of the Southern Ocean.  With all that a small package on a dock causes these brave defenders of the seas to shudder in fear.

The police arrived and discovered contained powder.  Speculation is it was placed with no ill will, but for Sea Shepherd in Australia to forward the package to their Cove Guardians in Taiji, Japan.  Further speculation is the content of the package was flea powder.  The Cove Coward Guardians have been thought to have infested Taiji with flea, bed bugs, lice, tics, and yeast infections.

The Cove Cowards of Taiji have put out an appeal to have their minions (suckers) purchase items on Amazon for them (see links below).  Perhaps this package was a result of that appeal.

As usual the Australian press was in sympathy with the fearing clowns an many posted the same headline:  “Suspicious package left near Sea Shepherd.” 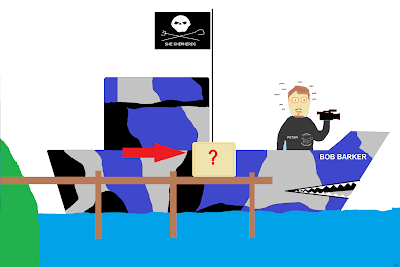 Posted by Tony aka: PropagandaBuster at 2:06 PM