Facebook offended by a flag and the sun rising over Texas 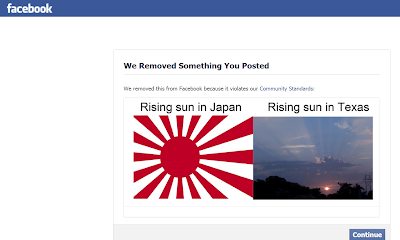 Facebook removed the above photograph because some jerk reported it as violating "community standards."  It is interesting the people at Facebook get a complaint and remove the photograph without investigating.

Facebook never provided an opportunity to respond or sent an email related to the removal.  The complaint was made, the photo was removed, and no need to allow the Facebook page moderator to respond.

Since when is a flag representing the navy of an trusted ally nation offensive and a the sun rising over Texas?  Perhaps further proof liberals hate Texas. 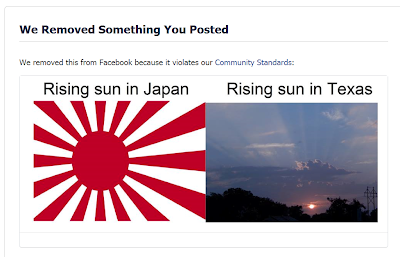 Only a dope would find the flag and a the sun rising in Texas to be offensive.  Welcome to the 21st century where freedom is dead.
Posted by Tony aka: PropagandaBuster at 11:05 AM

Strategic plan on occupation and annexation of Japan and South Korea by China
S.Maeda
The 12th plenum of Communist Party of China (CPC) Central committee (CC) on Feb.26 to 28, 2013 decided on 28, according to a space info, the new strategic plan on occupation-recapture operation of Islands Diàoyú Dǎo (the English name: Pinnacle Islands) which was captured by Japanese Meiji militarist power together with Liaodong Peninsula, Taiwan and the Penghu islands at the result of Sino-Japanese war in 1894~1895. Japan should return Islans Diaoyu Dao. But it is remained as a unsolved problemin in the result of WW2.
Next, the 12th CC plenum of CPC decided the strategic operation plan on occupation and annexation of Taiwan, South Korea and Japan to be forced in the beginning of 2014 by the majority vote, as scores members opposed to the plan,crying "Agression !".
Moreover, Chinese army has the plan on missile attack to Nuke plants(NP) in Japan: Onagawa NP, Fukushima-2 NP and Hamaoka NP. It will bring on annihilation of Japan and the whole world due to radioactive rays. This is the biggest crime in the Earth's history.
The information was leaked from the oppositional group of the plenum. And Japanese Abe's cabinet is prepering for the new Japanese-Chinese war. The forced pass of the new law on holding secrets in the Parliament was one of the preparation for the war against China. It was a neo-Nazi action of Japanese imperialism under the dependency on the USA. They are making a claim to China, crying "Senkaku Islands(Diaoyu Dao) are Japanese peculiar territories !".
Thus, Japan and the Earth are going toward ruin. it may be the result of the evil gene setting by evil ETs in remote ages.
The Creators will stop the new chinese-Japanese war. But the Satan resembling being in the Creators world may disturb. This is the indefinite moment in the Earth's destiny and the sword of Damocles
http://tatsmaki.blogspot.jp

Clearly the act of a Facebook employee implementing personal views. Or acting on behalf of Chindese or VANK interests. Wort raising hell with Facebook. This is America.