No so fast!  Now the Australian government announced they will not be sending a vessel, instead they are sending an aircraft to fly over the floating circus and the Japanese whaling fleet.  Is that flyover supposed to deter the cowards from illegally harassing the Japanese mariners?

Someone on Facebook suggested perhaps the Australian plane will have a banner reading “be nice.” 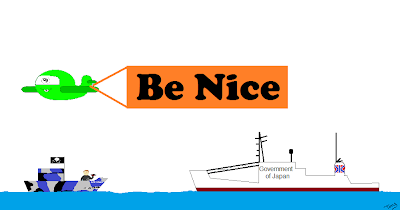 Posted by Tony aka: PropagandaBuster at 5:42 PM