Does The Dallas Morning News read their own paper? 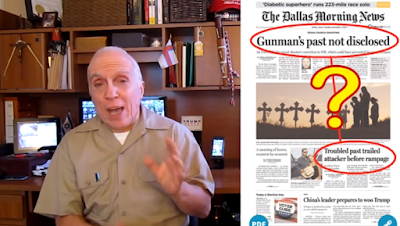 To view the above video, click on the below link:
https://www.youtube.com/watch?v=WnRnEUmvxEA


Does The Dallas Morning News
read their own paper?

The Dallas Morning News Tuesday, November 7th, 2017 edition indicates they do not read their own newspaper.  On the front page appeared this headline:

“Gunman’s past not disclosed”

This was in reference to the previous weekend’s mas shooting at a church in Sutherland Springs, Texas.

Then on the same front page appeared this headline:

“Troubled past trailed the attacker before rampage”

Huh?  How can they report about the murderer’s past when they stated his past was not disclosed?  One of those two headlines is either a lie or proof of the ignorance of the fake news media in the USA.

I had subscribed to The Dallas Morning News for 38 years and did not renew it this past January.  This was due to their vicious hate towards President Trump.  I can accept that nonsense on the editorial page, however it is unacceptable when that hate is injected in the regular reporting.

Link to Texas Daddy store:
http://texas-daddy.shop-pro.jp/
Posted by Tony aka: PropagandaBuster at 12:22 PM