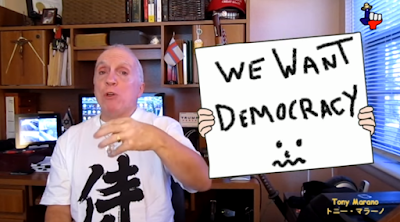 To view the above video, click on the below link:
https://www.youtube.com/watch?v=za8cKbTQG64

The Korean placed a brown paper bag over the head of the statue in an effort to protect it from bird poop.  Birds are notorious for pooping on statues.  This person had to do it at night out of fear for being attacked by the Comfort Women Mafia or the civil authorities.

Fear of the Comfort Women Mafia / fascists stems from the following:

South Korean professors Lee Yong-hoon and An Byeong-jik were beat up in South Korea by Comfort Women Mafia fascists who fear free speech, freedom of expression, and any deviation from popular thought, their orthodoxy.

The two professors expressed their opinions and the South Korean Comfort Women Mafia fascists beat them up just like the Nazi’s did in Hitler’s Germany.  Hitler’s opposition were silenced by brown shirt beatings.  Perhaps one day the good people in South Korea will rise up and stop these Comfort Women Mafia fascists to allow freedom of speech and freedom of expression.  See related links to articles below.

Disagreeing with the Comfort Women Mafia is free speech or placing a protective paper bag over the head of the Comfort Women statue is an act of freedom of expression.  Both of which are protected in many countries who claim to cherish freedom within their democracies.  Article 21 of the South Korean Constitution protects these freedoms, in part:

Notice it item number 4 “Should speech or the press violate the honor or rights of other persons, claims may be made for the damage resulting therefrom.”  Meaning if one’s exercise of free speech or expression offends anyone then a legal claim can be charged.  What kind of freedom is that?

Very simple and very protected.  The Emperor system in Japan is nearly 2,700 years old; it is part of the Japanese DNA.  Yet there are Japanese groups who want to dispose the Emperor system, and as of date they have not faced legal charges or been beat up.

Article about the two professors getting beat up for trying to enjoy free speech:
http://www.howitzer.jp/korea/page10.html

Link to Texas Daddy store:
http://texas-daddy.shop-pro.jp/
Posted by Tony aka: PropagandaBuster at 12:09 PM