Okay Japan it is your turn 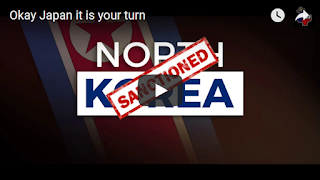 To view the above video, click on the link below:

Okay Japan it is your turn

President Trump and China both announced today sanction in reference to North Korea due to their nuclear bomb and missile program.  Did Japan and South Korea make similar announcements?

How about Japan considers the topic of this 2009 video:  Pachinko parlors in Japan where billions of dollars are funneled to North Korea.

The North Koreans basically have a depressed economy where mass starvation has become a way of life in the Hermit Kingdom.  So where are the North Korean communist and Dear Leader getting the billions to develop their nuclear weapons and missile program?  Good question!

Many South Koreans set up manufacturing plants in the Kaesong Industrial Region.  Products can be produced cheaper here than in China.  It is estimated the corporate tax paid by South Korean companies to the North Korean commies / Dear Leader (Kim Jong-ill in the head), is 1.78 billion dollars.

Looking at these figures it is rather easy to see where the North Koreans are getting their money to develop their missile and nuclear weapons which threaten South Korea, Japan, and the United States of America.

So while the USA and China are sanctioning North Koreans for their missile and nuclear development, Japan through the back door is financing these weapon developments.  Geo politics are just plain crazy?

Japan and South Korea announced what?

Link to Texas Daddy store:
http://texas-daddy.shop-pro.jp/
Posted by Tony aka: PropagandaBuster at 10:35 AM