A message to the Republican Party leadership, from "We the people"

The message to the Republicans in Congress from We The People, is to stay focus on the mandate just given to you by the voters. Stay true to our Constitution, and deep-six (thrash) any legislation not rooted in that document.

You will be told by them thar Democrats and the defunct news media now is a time to compromise, bipartisanship, and reach across the aisle, all to avoid gridlock. Ha!

First: We WANT gridlock! When Congress is in gridlock, the nation prospers and our freedoms are maintained

Second: Where was the compromise, bipartisanship, and reaching across the aisle when them thar Democrats and Nancy Pelosi controlled the House of Representatives? Those bums locked out Republicans, turned the lights off, and refused them access. It was the head of the regime, President Barack Obama who told Republicans, “I won,” and “elections have consequences.” They sure do and now Republicans won. 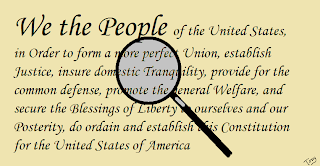 We are angry at what happened these past two years and we want YOU to be just as angry and block anything originating from the other side of the isle. Because whatever it is, most assuredly will be rooted in class envy, politics of division, and unconstitutional. Show respect and fidelity to the Constitution and you will in turn do the same to your voters.

Violate this mandate, and it two years the Republican Party will be the third party thrown upon the scrap heap of history. Because we will form a new party, a conservative party to counter them thar Democrats while at the same time tossing you aside.
Posted by Tony aka: PropagandaBuster at 2:04 PM