The death of American capitalism thanks to the environmentalist

The environmentalists are a major reason for the death of capitalism in the USA responsible for jobs leaving. Also responsible to the declining agriculture output with onerous EPA regulations with a goal of harming America’s ability to feed itself.

The government in Washington, DC is bloated and lost control of the bureaucracy which has been infiltrated by these anti-capitalists masquerading as environmentalist. The preponderance of EPA (Environmental Protection Agency) regulations churned out by Washington, DC has been a hindrance to American commerce. This in itself is anti-Constitutional as it clearly violates the spirit and intent of that document.

The EPA recently placed levels upon the 50 states the amount by which greenhouse gases must be reduced by January, 2011. The state of Texas told the EPA to get lost. 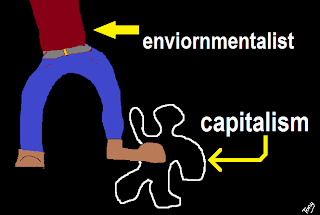 These new demands will cause manufactures to spend additional money, thus raising the cost of producing products. In effect either has to raise prices, reduce employees, or moving outside the USA where no such regulations exists. If the manufacturer decides to stay in the USA, then it must compete with lower price items imported in the USA from countries not fortunate enough to have an out of control EPA with their business stifling regulations.

When the Constitution was written to replace the Articles of Confederation in 1787, one of the primary mandates was to effect interstate commerce to break down the barriers between the states, thus promoting, not hindering commerce within the USA. The EPA is in violation of Article 1, Section 8, Clause 3 of the United States Constitution:

“[The Congress shall have Power] To regulate Commerce with foreign Nations, and among the several States, and with the Indian tribes;”

The Founders intended “regulate” to mean promote. The Founder Fathers to promote the Constitution among the states wrote a series of papers detailing the intent of this new constitution, which have been combined in “The Federalist Papers.” The word “commerce” appears 400 times among these 85 papers. One would be hard pressed to locate where any such reference was made to hinder commerce by this new form of government.

Here is a PDF file of The Federalist Papers: