History lesson for Korea and China 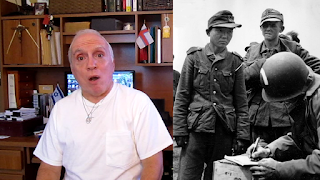 Link to above video:
https://www.youtube.com/watch?v=-mYS_2TZoik

History lesson for Korea and China

Sensei Tony here to teach history to some Koreans and Chinese.  Some on the Korean peninsula and in China with self-righteous smugness continue to admonish Japan with something like this:  “Denying your history you have no future.”  With that they then take it upon themselves to lecture history as they see it in South Korea and China.  This video does not attempt to assign who is incorrect and who is correct.

This video is an attempt to teach South Korea and China some of their history they seem to be ignorant of.  Also this video by teaching them their history will help them guarantee their future.

Question if any of the information in this video can be located in history text books both in South Korea and China.  During the Second World War (WWII) the Korean peninsula was part of Japan.  Many Korean men volunteered to join the Imperial Japanese Army.  A large number of these Koreans attended Japanese military academies and rose high in the ranks of the Imperial Japanese Army.

Why did these notable Koreans volunteer to join the Imperial Japanese Army if that army was dragging their women off the peninsula and forced into sexual slavery (Comfort Women)?

Korean Hong Sa-ik rose to the rank of Lieutenant Major General in the Imperial Japanese Army.  He rose to such a distinguish level he was placed in charge of all the Prisoner of War (POW) camps in the Philippines.

At the end of the war Lieutenant Major General Hong Sa-ik was arrested and placed on trial as a war criminal for the atrocities in those camps under his command.  Many of those camps had Korean guards who were sadistic and tortured the POWs.  They did this in an attempt to prove their worth as Korean soldiers in the Imperial Japanese Army.  Hong Sa-ik was found guilty, classified as a Class A War Criminal and executed (hung) in 1946.

His story continues:  In 1966 he spirit was interned in Tokyo, Japan, at a Shinto Shrine, the Yasukuni Shrine (靖国神社 or 靖國神社).

The Yasukuni Shrine houses the spirits of Japan’s war dead from about the mid-1860’s through the end of World War Two.  Whenever any notable Japanese person makes a trip to the Shrine to show respect, the South Korean and Chinese governments issue annoying criticism.  How come the Allied nations such as the Philippines, New Zealand, India, Australia, United Kingdom, Canada, and the USA do not issue any diplomatic objections?

The only two to object South Korea and China are two nations that assisted the Imperial Japanese Army.  Koreans joined not only the Imperial Japanese Army they also joined Hitler’s Nazi army.  Some Chinese also joined Hitler’s Nazi army.  The current Communist government in China helped the Japanese by hindering the Nationalist Chinese under Chiang Kai-shek.  He had to fight both the Communist Chinese and the Japanese, dividing his military resources.

Link to Texas Daddy store:
http://texas-daddy.shop-pro.jp/
Posted by Tony aka: PropagandaBuster at 3:41 PM