The San Francisco City Council approved to install a Comfort Women statue in one of its parks to join Glendale, California and Brookhaven, Georgia.  These city councils were hood-winked by the Korean population within their jurisdiction into thinking these statues / hunk of junk represent peace and memorializing women victims of war.  They are stupid, illiterate, or paid well.  The inscriptions placed on a slab next to these statues clearly illustrate hatred towards the nation and people of Japan.

Here is the inscription in part next to the hunk of junk statue placed in Brookhaven, Georgia:

This memorial honors the girls and women, euphemistically called “Comfort Women,” who were enslaved by the Japanese Imperial Armed Forces from 1931 to 1945.

The Comfort Women constitute one of the largest known cases of human trafficking in the 20th century with estimates ranging up to the hundreds of thousands.  This dark history was hidden for decades until the 1990s, when the survivors courageously broke their silence.

The Comfort Women are from at least thirteen Asian-Pacific countries, principally from Korea.  Most died or were killed during World War II.

This memorial is dedicated to the memory of these girls and women and to the crusade to eradicate sexual violence and sex trafficking throughout the world.

We will never forget.  We will teach the truth.”

The statue / hunk of junk represent peace?  One was placed across the street from the Japanese embassy in Seoul, South Korea.  Another placed near the Japanese Consulate in Busan, South Korea, and recently one placed near the Japanese Consulate in Hong Kong.  If they represent “peace” and women victimized by war, why then only in front of Japanese diplomatic buildings?  Why not Chinese, Taiwanese, or Philippine diplomatic buildings?  They too had women victimized by war, yet they are ignored.

The statue placed in Hong Kong was recently placed to commemorate the 80th anniversary of the “Marco Polo Bridge Incident.”   This was a fire fight at the bridge in 1937 between Chinese and Japanese troops igniting the Second Sino-Japanese War.  The statue is scheduled to remain in place for December 13, 2017.  That is the date of 80 years ago when the Nanking / Nanjing incident occurred.  Note these two events have absolutely nothing to do with the Comfort Women issue.  It was placed as pure hatred aimed at Japan.  Not convinced yet?  Then please read further:

With the placement of the hunk of junk / statue in Hong Kong, it was adorned with numerous replications of the Japanese Navy flag, printed with the face of Japan’s Prime Minister Shinzo Abe.   Then they were placed on the ground, and under the feet of one of the statues / hunk of junk.  That represents peace or hate.  Pure Japan bashing. 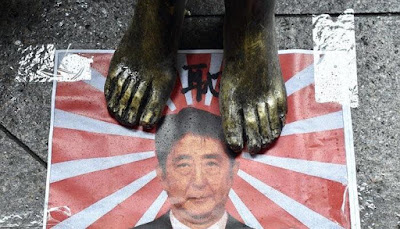 Posted by Tony aka: PropagandaBuster at 11:38 AM