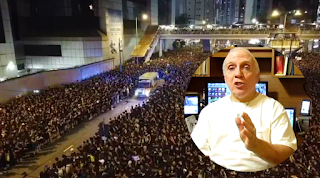 Link to above video:
https://www.youtube.com/watch?v=z_2-70mpkP8

An ambulance need to get through the crowd.  The crowd of nearly two-million parted orderly allowing the ambulance to drive through.  It was as if Moses had parted the Red Sea to escape Pharos army.


Related article about the ambulance:
https://www.nydailynews.com/news/world/ny-20190616-7ox3jjv4rje7na6ozyhrulsffu-story.html

Posted by Tony aka: PropagandaBuster at 12:39 PM