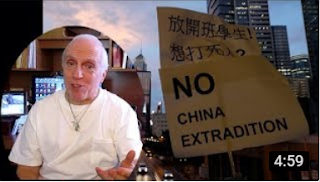 Link to above video:
https://www.youtube.com/watch?v=wUV6uxyVSqo

The mess, the chaos in Hong Kong can be traced to the Brits, the United Kingdom.  Some background:

In the last part of the twentieth century the United Kingdom transferred Hong Kong and the New Territories to the Commies in China.  With an agreement to maintain a “one country, two systems” for the transferred people.  Meaning Hong Kong keeps capitalism and representative government until 2047, then it will transfer to what systems oppresses the rest of China at the time.

Posted by Tony aka: PropagandaBuster at 12:50 PM